WASHINGTON, Aug. 11 (Yonhap) -- South Korean Trade Minister Yoo Myung-hee vowed Tuesday to make the World Trade Organization more relevant and responsive to challenges posed by the coronavirus pandemic and new economic realities if she is elected as its next chief.

Yoo made the comment during a virtual seminar hosted by the Washington International Trade Association as she presented her vision as a candidate for director-general of the WTO.

The trade body plans to launch the selection process on Sept. 7 after current Director-General Roberto Azevedo of Brazil stands down this month. 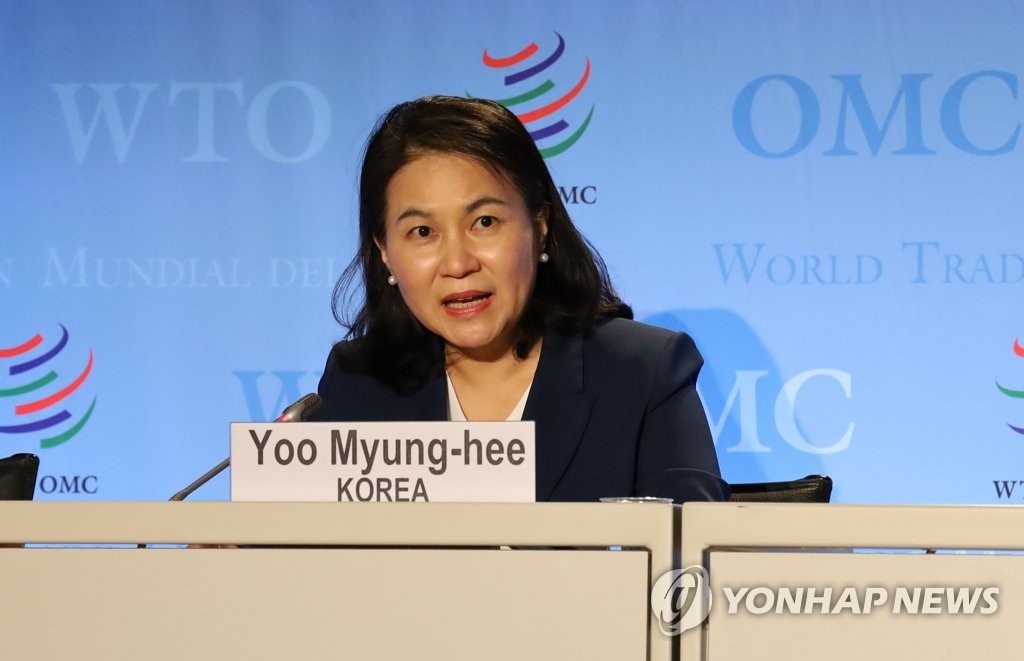 "The status quo won't work," Yoo said, citing recent conversations she had with fellow ministers and ambassadors at the WTO headquarters in Geneva. "All the members share the same disappointment, even frustration, that the WTO has fallen behind, not only in response to the pandemic but also in addressing the economic realities of the 21st century."

The minister said there are diverse views on how to reform the WTO but a shared commitment to the multilateral trading system.

She said the global crisis triggered by COVID-19 can create new momentum to strengthen multilateralism in the face of rising protectionism and growing uncertainty.

"I will harness all the members' frustration, hope and commitment to make the WTO more relevant, resilient and responsive," Yoo said, referring to the 3R's that she has used as her campaign slogan.

In particular, the minister pointed to the need to revitalize the body's negotiating function, address the impasse in its appellate body and restore its dispute settlement function.

"WTO needs to show that it can evolve and adapt to the economic realities that business faces," she said. "In response to COVID-19, the WTO should continue to enhance transparency of trade-related measures and lead discussions to ensure the free flow of goods and services."

Yoo also said developing countries need to be fully integrated into the global trading system, a task she said she is prepared to handle after witnessing her own country's rise from the ruins of the Korean War.

The minister noted her experience negotiating and implementing trade deals with the United States, China and the European Union.

"The next DG should be able to rebuild trust in the multilateral trading system, and I am that person," she said.

Yoo is the third South Korean to run for director-general of the WTO. Two South Koreans made unsuccessful bids in 1994 and 2012.

Yoo was appointed as trade minister in February last year, becoming the first woman to be named to the top-ranking position in the 70-year history of the trade ministry. She is fluent in English and served as the presidential office's spokesperson for foreign correspondents.