SEOUL, Aug. 12 (Yonhap) -- The government of Seoul said Wednesday it will not permit massive Liberation Day rallies planned by various civic groups in central parts of the capital, citing fears of coronavirus transmission.

The Seoul metropolitan government said it has officially asked 14 civic groups to cancel their plans to hold rallies throughout central Seoul on Saturday, which coincides with the annual Liberation Day, a national holiday to celebrate the end of Japan's 36-year colonial rule of the Korean Peninsula in 1945.

The municipal government said its decision is aimed at halting the spread of the coronavirus outbreak, as the Saturday rallies are expected to draw some 50,000 participants to the bustling downtown areas. 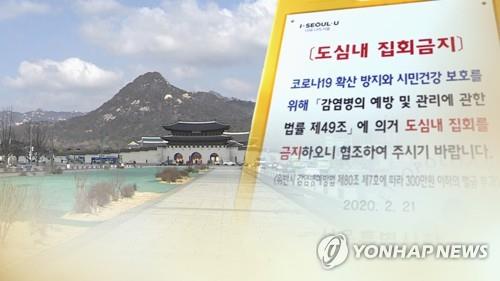 "Many civic groups are planning to organize large-scale outdoor gatherings attended by crowds of people. They were asked Tuesday to cancel their planned rallies," said Park Yu-mi, a ranking municipal official in charge of COVID-19 countermeasures, in a media briefing.

"If they don't comply, the Seoul government will mobilize all possible means, including issuance of no-assembly orders, to help stem the spread of the coronavirus outbreak," Park said.

The Seoul metropolitan government already banned gatherings in public squares in the city center, including Seoul Plaza and the Gwanghwamun square, in February as part of coronavirus measures, but it has imposed few restrictions on rallies held elsewhere.

Aware of the ban, the 14 civic groups, mostly conservatives critical of the Moon Jae-in administration and its policies, declared their plans to hold rallies outside the no-assembly zones, but they have been asked to cancel their rallies by the Seoul government.

The municipal government said it will consider issuing no-assembly orders for those Liberation Day rallies in consideration of public interests, if its cancellation requests are not met.

The number of coronavirus cases in Seoul rose by six in a day to reach 1,694 as of Tuesday.