Judge Park Sung-kyu at the Seoul Southern District Court found her guilty of buying real estate under borrowed names and using inside information obtained while working as a public servant.

"The case undermined people's confidence in public officials, as the defendants used inside information obtained on duty and bought real estate under borrowed names, expecting a rise in value," he said.

"This amounts to serious corruption that should be corrected in our society. Since the defendants showed no remorse in court, sentencing jail time is inevitable," the judge said, delivering the verdict.

In June last year, Sohn was indicted on charges of violating an anti-corruption law and a law banning purchase of real estate under borrowed names.

She started to buy buildings and land, worth 1.4 billion won (US$1.18 million) in total, under the names of her nephew, acquaintances and a cultural foundation led by her husband, in an old district of Mokpo, about 410 kilometers south of Seoul, before the Cultural Heritage Administration (CHA) designated the area as a "modern history and cultural site" in December 2017, according to prosecutors. The transactions continued as recently as in January 2019, they said.

The court concluded that she used the inside information that she acquired while serving on the National Assembly's culture committee, and dismissed her claim that the information had already been in the public domain.

It also ruled that she and her secretary violated the real estate law when they bought the guesthouse Changseongjang under borrowed names together. It issued a confiscation order for the guesthouse.

After the ruling, Sohn wrote on her Facebook page that she will appeal the decision at a higher court. 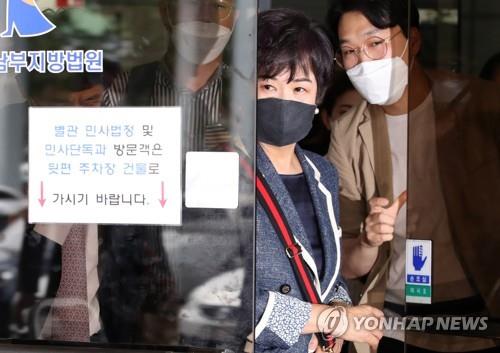