SEOUL, Aug. 13 (Yonhap) -- The operating rate of South Korea's small and medium-sized manufacturing firms remained below 70 percent for a fifth month in June amid the coronavirus outbreak, a poll showed Thursday.

Their average capacity utilization rate stood at 67 percent in June, down 6.9 percentage points from a year earlier, according to the survey by the Ministry of SMEs and Startups and the Korea Federation of SMEs.

The reading had hovered below the 70 percent mark since February, when it amounted to 69.6 percent.

It is the first time in 11 years that the SMEs' average operating rate has stayed below 70 percent for the fifth straight month. 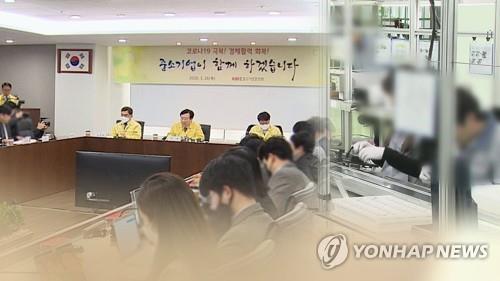 Hit hardest were makers of leather products, bags and footwear, with their operating rate coming to 57 percent, while beverage manufacturers posted the highest rate of 76.1 percent.

Industry watchers attributed the low capacity utilization rate to the outbreak of COVID-19, which has sent South Korea's private consumption hitting the skids.

According to a separate poll of 921 SMEs by the federation in mid-June, 80.4 percent picked anemic domestic demand as the biggest hurdle to their management in the first half.

Roughly 80 percent of the respondents also said slumping domestic demand would continue to weigh down their business for the remainder of the year.
(END)