SEOUL, Aug. 13 (Yonhap) -- Beginning with matches on Friday, the cap on crowds at South Korean football matches during the novel coronavirus pandemic will be raised to 25 percent of capacity.

The Korea Professional Football League (K League) first opened its gates to fans on Aug. 1. The government then gave sports leagues the green light to start operating stadiums at 30 percent capacity, up from the previous level of 10 percent.

To continue to ensure the safety of its supporters, the K League will stay at the 25 percent level. 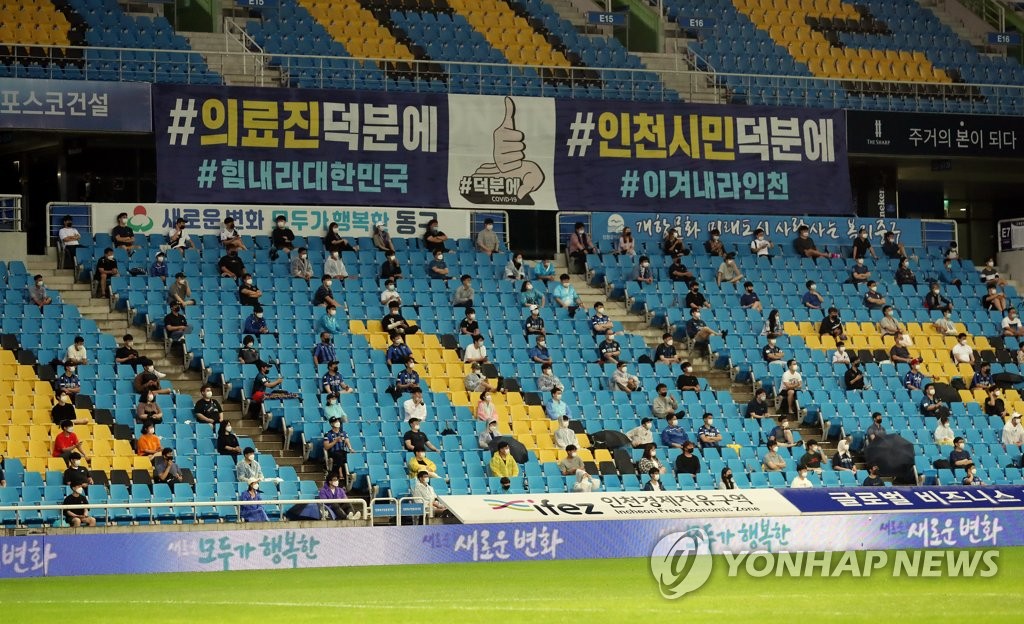 The top-flight K League 1 kicked off its season on May 8, as opposed to Feb. 29 as originally scheduled, due to the COVID-19 outbreak. Its 12 clubs played their first 13 matches without fans in the seats, and they had been experiencing some financial issues without any gate receipts.

Opening back up at the start of this month provided a welcome relief for those clubs, some of whom will be able to admit well over 10,000 fans.

Several restrictions will remain in place under the league's health and safety manual. Fans must go through temperature checks at entry and must keep their masks on once inside the stadium. They must all sit apart from one another. Fans are also prohibited from eating and drinking alcoholic beverages from their seats. Loud chanting, singing and other cheering activities are also banned.

Clubs playing at smaller stadiums won't be able to reach the full 25 percent limit under the seating arrangement regulations.

The weekend action will begin with a Friday evening match between Seongnam FC and Busan IPark at Tancheon Sports Complex in Seongnam, just south of Seoul. 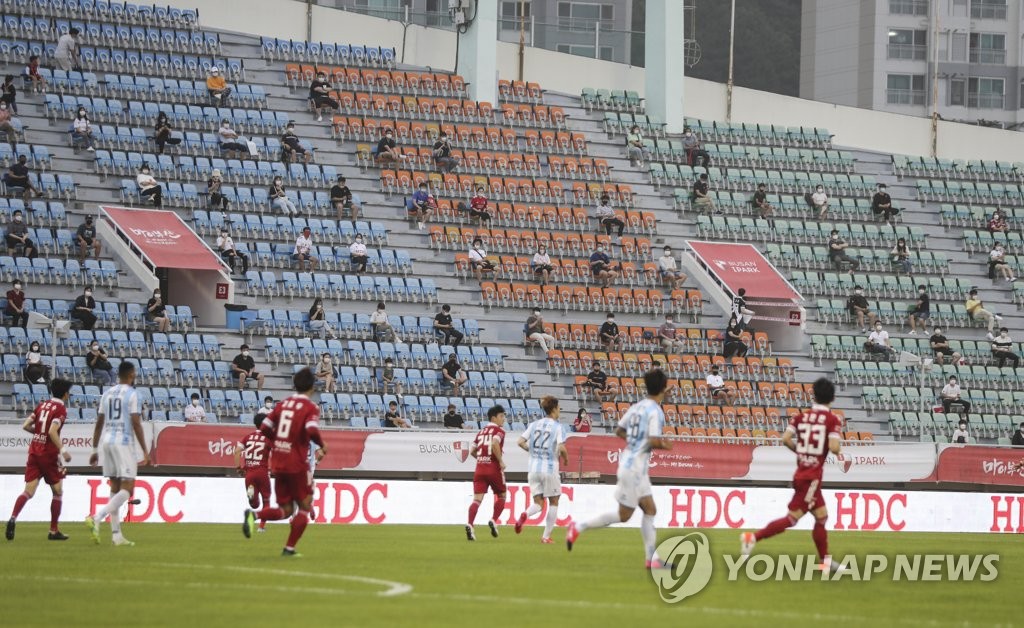 The two leading horses in the title race will both be in action Saturday. The league-leading Ulsan Hyundai FC will host Pohang Steelers at Ulsan Munsu Football Stadium in Ulsan, 415 kilometers southeast of Seoul. Jeonbuk Hyundai Motors, the three-time champs trailing Ulsan by just one point at 35, will visit Suwon Samsung Bluewings in Suwon, 45 kilometers south of the capital.

Ulsan were held to a scoreless draw by Suwon last week, while Jeonbuk topped Daegu FC 2-0 to close the gap.

Ulsan routed Pohang 4-0 in their first meeting of the season on June 6, and Pohang are winless in their past three matches. And Ulsan, the league's most lethal offense with 34 goals in 15 matches, will try to get back to their high-scoring ways after firing blanks against Suwon.

Their Brazilian striker, Junior Negrao, is leading the league with 18 goals and is one away from tying his career high set in 2019.

Pohang have their own offensive weapon in Stanislav Iljutcenko, who has netted 10 goals to rank second behind Junior Negrao on the league leaderboard. 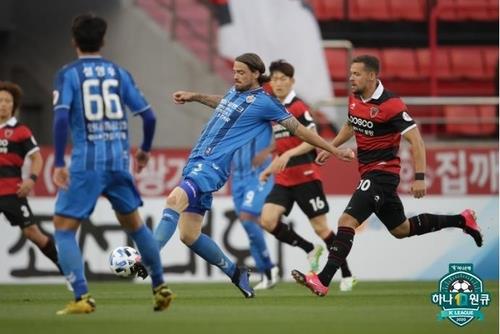 Jeonbuk will be heavily favored against Suwon, who are in 11th among 12 teams and have just one victory in their past eight contests.

Also on Saturday, FC Seoul will look to extend their winning streak to three matches against third-ranked Sangju Sangmu. FC Seoul have won both matches under interim head coach Kim Ho-young, climbing from 11th to eighth in the table.

On Sunday, Incheon United will visit Daegu FC in pursuit of their first victory of 2020. They have five draws and 10 losses so far. It will be the second match for their new head coach, Jo Sung-hwan.

Gwangju FC will host Gangwon FC on Sunday in a battle of clubs separated by one point in the table. Gangwon are in seventh place with 16 points, with Gwangju one back in 10th. 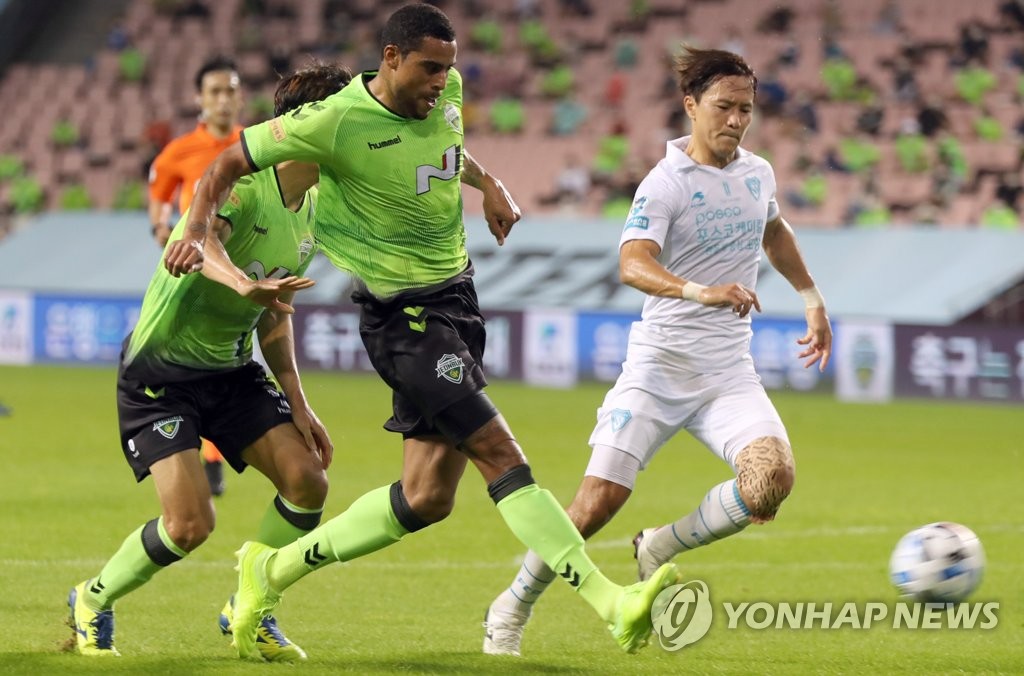 Cap on football crowds set to increase to 25 pct Friday

Cap on football crowds set to increase to 25 pct Friday