SEOUL, Aug. 13 (Yonhap) -- Significant flooding has happened along a river near North Korean's Yongbyon nuclear complex, and facilities at the complex could have been damaged, a U.S. monitoring website said Thursday.

The website 38 North, a think tank monitoring North Korea, made the analysis based on satellite imagery from Aug. 6, saying that "water had reached the two pump houses that service the reactors" at Yongbyon nuclear complex.

"The August 6 imagery, when compared to imagery from July 22, shows a dramatic rise in the water level of the Kuryong River that flows alongside the Yongbyon complex," the think tank said. It said the flooding appears to be the worst in recent years.

The think tank also revealed an image of a fully submerged dam on the Kuryong River and pointed out that the flood could potentially damage the pumps or clog piping systems that draw water from the river, causing the reactor to shutdown.

The defense ministry declined to confirm the report.

"Our military is always closely monitoring the North's nuclear and missile activities, and the authorities of South Korea and the United States are keeping a close cooperation system," deputy ministry spokesperson Col. Moon Hong-sik said during a regular press briefing.

The complex is home to a 5-megawatt nuclear reactor that was the source of weapons-grade plutonium for the North. Pyongyang can harvest one nuclear bomb worth of plutonium by reprocessing spent fuel rods from the reactor.

"Although the 5 MWe reactor does not appear to have been operating for quite some time, and the Experimental Light Water Reactor (ELWR) has yet to come online, both would need consistent water flow to operate," 38 North said.

"Therefore, if or when either of the reactors is operating, clogged intakes and/or broken or damaged pumps would necessitate a shutdown," it said.

Satellite imagery from Aug. 8 and 11, however, shows that the waters have receded, suggesting there was no damage to key facilities, such as the Uranium Enrichment Plant (UEP), the think tank added.

The North has been hit hard by unprecedented heavy rainfall this month, causing flood and damage across the country. 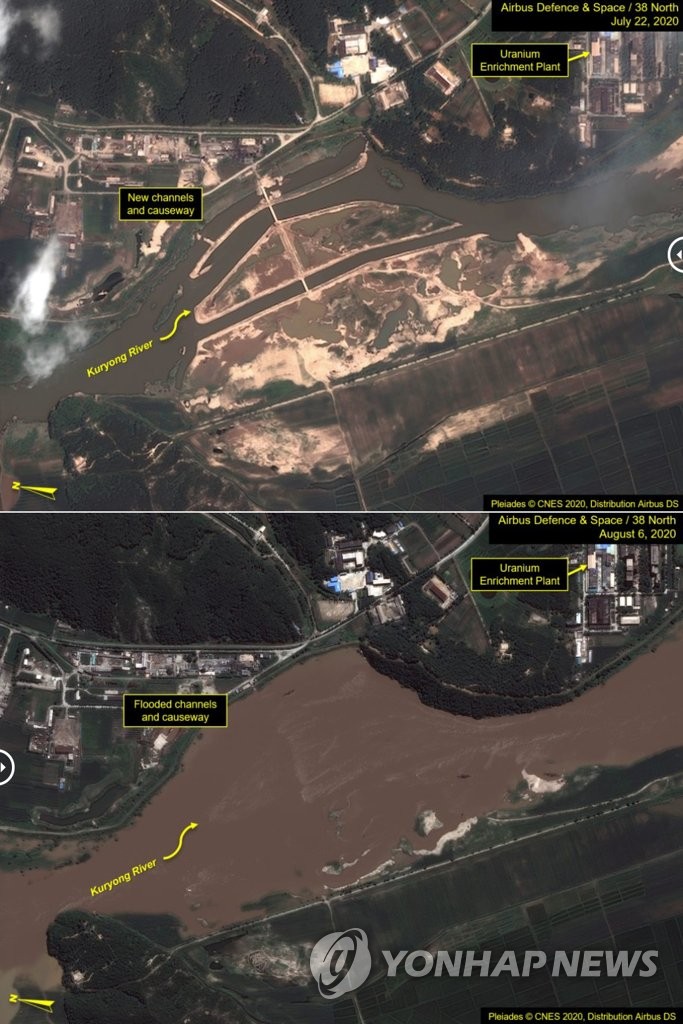