SEOUL, Aug. 13 (Yonhap) -- South Korean prosecutors on Thursday called in Youn Mee-hyang, a lawmaker of the ruling Democratic Party, for questioning on her alleged embezzlement of public donations for wartime sexual slavery victims.

The interrogation came three months after the police began looking into allegations that a civic group that Yoon led for three decades misappropriated public funds meant to be used for the victims who were forced to work in Japanese military brothels during World War II.

The prosecution has grilled Youn on whether she personally used part of the donations that she had raised via a personal bank account and whether there was any illegal activity involved when the group bought a shelter for the victims, euphemistically called "comfort women," in Anseong, south of Seoul.

Youn won a parliamentary seat in the April 15 general elections and left the group, Korean Council for Justice and Remembrance for the Issues of Military Sexual Slavery by Japan.

In May, the decadeslong South Korean civic movement to shed light on the sufferings of the comfort women became embroiled in controversy when Lee Yong-soo, one of the 17 South Korean surviving victims, publicly accused the group of mistreatment and misuse of public funds.

At a news conference at that time, Lee, 92, accused Youn of "using" the aged victims to raise funds and help promote the cause of the group, which she claimed has "never spent" the money for her and the other women.

Soon after, complaints were filed by civic groups against Youn and several other officials of the group, accusing them of embezzlement and accounting fraud.

On May 30, Youn publicly apologized for causing controversy but denied the allegations. 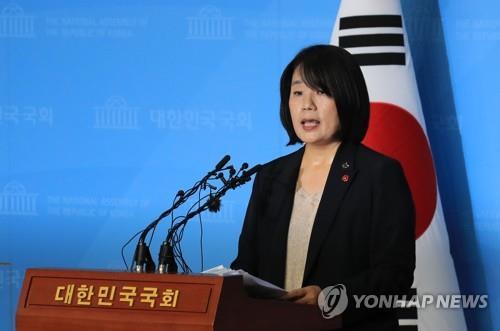 Lawmaker grilled for alleged misuse of donations for comfort women

Lawmaker grilled for alleged misuse of donations for comfort women