Eight film directors from the Directors Guild of Korea participated in the yearslong movie-drama collaboration to produce eight different sci-fi episodes about the world in the near future where human relationships are changed by technological advancements, like artificial intelligence.

The eight 50-minute-or-so episodes are "Prayer" by Min Kyu-dong, "Blink" by Han Ka-ram, "Joan's Galaxy" by Lee Yoon-jung, "Manxin" by No Duk, "White Crow" by "Jang Chul-soo, "Love Virtually" by Oh Ki-hwan, "Baby It's Over Outside" by Ahn Kook-jin and "Empty Body" by Kim Ui-suk.

Following the first release on Wavve in July, MBC will air the programs one by one every Friday starting this week. 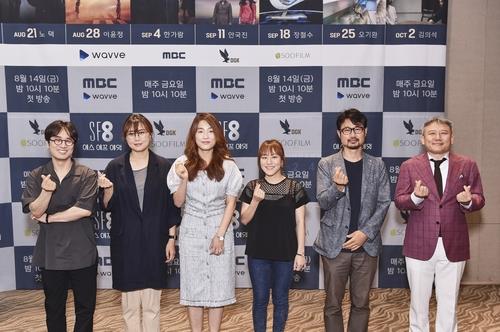 "When we first designed this project, we intended to make pieces that are free from special techniques and the process required for a commercial film," director Min Kyu-dong, who leads the tripartite crossover project, said in a press conference in Seoul.

"It was very fresh and strange for us to take into account TV audiences and smartphone users, not those who spend two hours in a theater," he said. "So we have to change our mindset and direct and shoot scenes in a different way, given smaller screens."

He said TV viewers will initially find the film-like sci-fi dramas unfamiliar in terms of the length and the genre but will be curious about the storytelling and rendering that are rarely seen in TV shows.

"It's like we prepared a foreign cuisine for our guest," said Min, who directed "All About My Wife" (2012) and "Herstory" (2018). "Years later, I think this project will be remembered as a turning point in Korean media history."

Director Oh Ki-hwan, who directed the romantic comedy "The Art of Seduction" (2005), said the crossover project reflects the borderless media world, in which people can choose their favorite platforms or devices whenever and wherever they want.

His rom-com episode "Love Virtually," slated for Sept. 18, revolves around a couple who interacts and communicates with each other through a virtual reality application.

"These days, long-running film directors join hands with TV stations or Netflix, or vice versa. There has been no clear division among platforms," he said. "Now, films, TV series or short-form dramas are released through various platforms and channels."

Director Jang Chul-soo, who made the action comedy "Secretly Greatly" (2013), said he is scared of receiving real-time responses from TV viewers after his horror "White Crow" is shown on Sept. 11.

"As a film director, I've never been bothered by viewership ratings day by day," he said, laughing. "It's interesting that many unspecified people will watch my show."