At the annual session, the two sides agreed to strengthen energy cooperation related to Southeast Asia, a region with which they have tried to build stronger ties due to its growth potential, rich resources and geopolitical significance.

The officials also agreed to cooperate on ensuring the stable supply of energy resources and security in the online management of power grids.

"Both sides stressed that energy cooperation between South Korea and the U.S. plays a crucial role in strengthening the bilateral friendship and alliance," the ministry said in a press release.

Chung used the session to explain Korea's efforts for a structural shift to a low-carbon society based on its policy initiatives such as the Green New Deal project aimed at countering climate change through greenhouse gas emission cuts and other endeavors.

Ahead of the session, the two sides held a roundtable discussion with civilian experts to discuss hydrogen industries, trends in the liquefied natural gas market and other related issues.

The energy security dialogue was launched in 2013 in line with a bilateral summit agreement to expand energy cooperation. 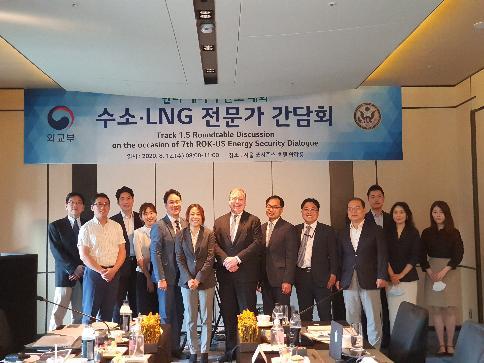