SUWON, South Korea, Aug. 13 (Yonhap) -- A district court on Thursday dismissed the request by the leader of a minor religious sect at the center of the early coronavirus outbreak in South Korea to cancel his pre-trial detention.

Lee Man-hee, the leader of the Shincheonji Church of Jesus, was arrested on Aug. 1 on charges of obstructing the government's efforts to contain the spread of the novel coronavirus pandemic.

Lee requested the Suwon District Court to review the legality of his detention Wednesday. The judge ruled that there is no reason to revoke his arrest warrant. 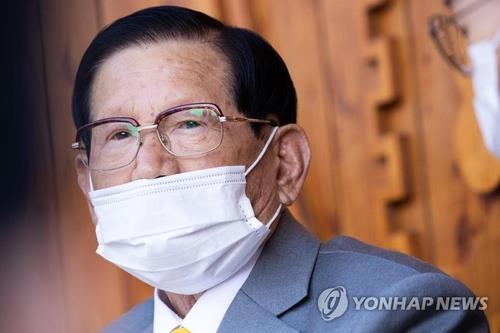 Lee, 89, is suspected of submitting false documents to health authorities on the number of participants at the sect's gatherings and the locations of the gatherings in February when the sect was at the center of the virus spread in the early phase of the COVID-19 outbreak in the country.

Some 4,000 followers, most of whom were from its branch in the southeastern city of Daegu, were infected with the COVID-19 virus.

The country reported an additional 56 confirmed cases on Thursday, including 47 local infections, raising the total caseload to 14,770, according to the Korea Centers for Disease Control and Prevention.