In a monthly economic report, called the Green Book, the Ministry of Economy and Finance also flagged the economy's continuing uncertainty stemming from the coronavirus pandemic and the annual monsoon season.

"South Korea's indicators of domestic demand continue to take a turn for the better, despite uncertainty related to COVID-19 and the rainy season," the report said. "The economy is also showings signs of its exports and output declining at a slower pace." 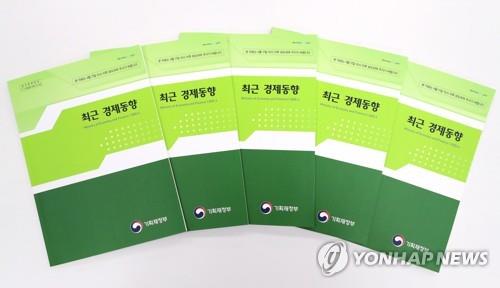 The South Korean economy has been battered by the novel coronavirus since the first case was confirmed here on Jan. 20. Monsoon-season heavy rains have pounded the central and southern regions, leaving 42 people dead or missing and more than 7,800 people displaced and inflicting huge property damage.

The report said indicators of South Korea's private consumption continued to improve in July, raising hopes for an economic recovery.

The country's consumer sentiment index came to 84.2 last month, well below the benchmark 100, but it continued improve from previous months.

In July, South Korea's exports sank 7 percent from a year earlier, but it was much lower than the 10.9 percent dip in June, thanks to the easing of lockdowns in major economies.