In a Gallup survey of 1,001 adults nationwide conducted from Tuesday to Thursday, Gov. Lee was favored by 19 percent of respondents, beating out his political rival Rep. Lee, who obtained support from 17 percent.

Gallup said it asked the pollees to pick their favorite presidential hopeful without presenting candidate names.

Rep. Lee, who formerly served as prime minister, had held onto the top post in surveys of presidential hopefuls for seven months but was overtaken by Gov. Lee for the first time, Gallup said. 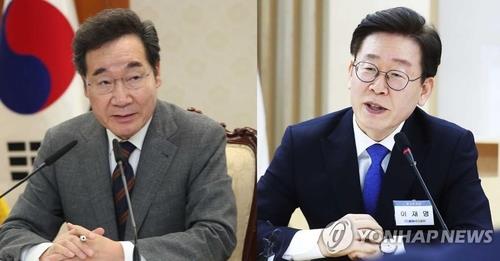 By sex, male respondents (25 percent) favored Gov. Lee, and female respondents (18 percent) preferred Rep. Lee. The poll has a margin of error of plus or minus 3.1 percentage points, with a confidence level of 95 percent.

"Despite the reversed endorsement rates of the two Lees, it's still difficult to determine who is dominant, as presidential candidates are usually elected through intra-party competition. Rep. Lee is ahead of his rivals among Democratic Party supporters, while the two show similar popularity rates of around 30 percent among liberals," said a Gallup Korea official.