SEOUL, Aug. 14 (Yonhap) -- After months of eased social distancing and ups and downs in the number of new virus cases, South Korea's virus fight is again being put to the test as sporadic cluster infections and rising cases with unknown routes may rise further over the weekend and summer vacation season.

The country on Friday reported 103 more COVID-19 cases, nearly double from 56 cases the previous day. What is worrisome is that the number of daily domestic infections marked 85, the most since March 31 when the country identified 88 cases.

Taken aback by the spiking domestically transmitted cases, health authorities are looking at an option of rolling back to enhanced social distancing in some areas, such as the capital Seoul and adjacent areas, which have been haunted by a series of cluster outbreaks at churches and other facilities.

Health experts have warned that South Korea is in real danger of facing another wave of virus infections, and the situation could be worse compared to the May-June period when the country suffered from club-linked infections in Seoul's nightlife neighborhood and warehouse-connected cases. 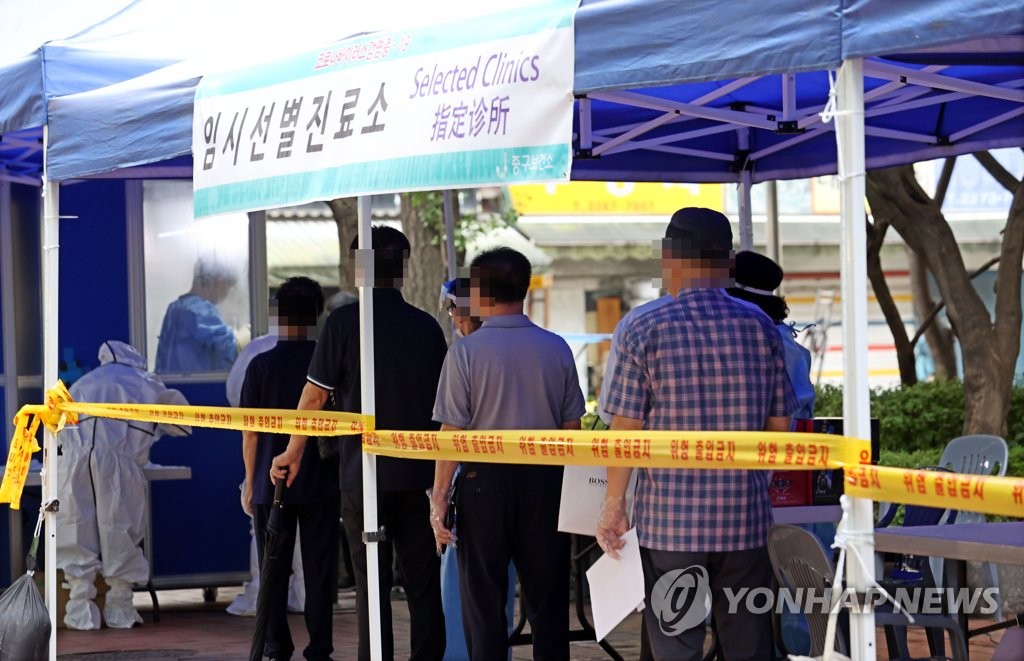 Kwon Jun-wook, a senior health official, said it is worrisome that this time the country is seeing multiple cluster outbreaks simultaneously in the densely populated capital area, home to about half of the nation's population of 50 million.

"The country's capital area is in a volatile situation," he said.

Of the 85 newly identified local cases Friday, 72 were from the nation's capital area.

While previous cluster infections in the capital area involved specific locations, such as Itaewon clubs and logic centers, health authorities are concerned that recent cases came from places where large floating populations of unspecified individuals come and go, meaning "silent spreaders" could be still out there.

"Silent spread of the virus is going on in many areas of the capital region, but we do not know who is a virus carrier," said Kim Woo-joo, a professor for infectious diseases at Korea University in Seoul. "It is like people are living in a 'city of the blind.'"

So far, 11 cases have been connected to a gathering of employees from Lotteria, a fast-food franchise, in Seoul. Some of them are workers from Lotteria branches near subway stations.

Last month, virus cases were detected at a coffee shop and a restaurant in Seoul. So far 16 cases related to those spots have been confirmed.

Merchants at Seoul's Namdaemun Market and Dongdaemun Market have also been confirmed to have tested positive for COVID-19. 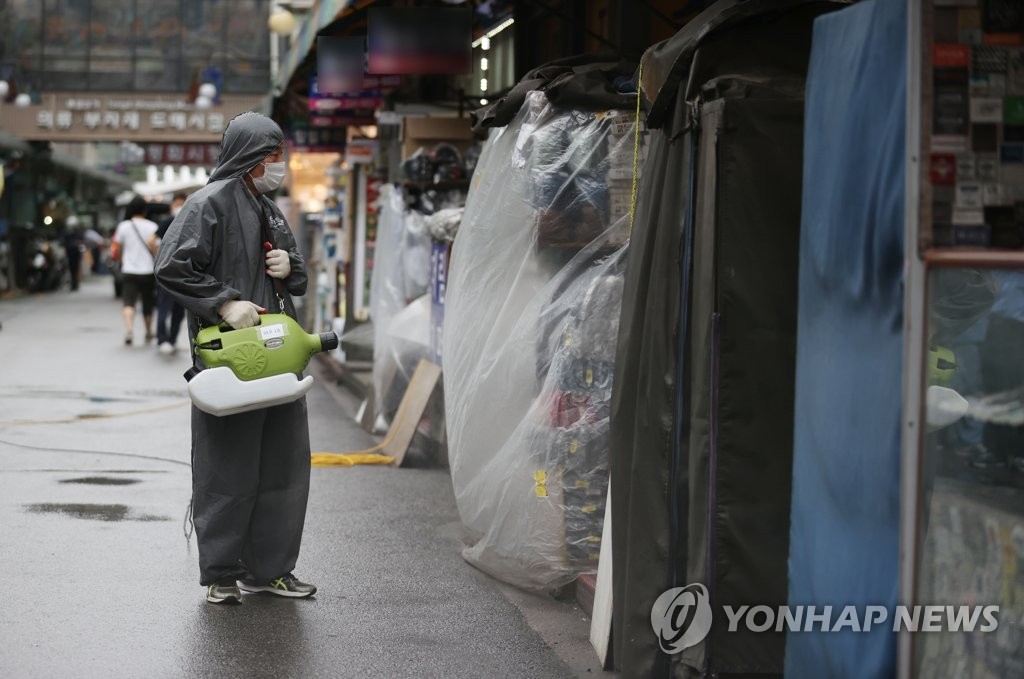 So far, at least 34 cases have been linked to a church in Goyang, just north of Seoul. The outbreak at the church has led to infections at the Namdaemun Market in central Seoul and a day care center in Goyang.

Also, at least 23 cases have been traced to another church in Goyang, which also led to infections at worshipers' workplace and schools.

As domestic infections showed no signs of letup, health authorities said they will start to review adopting an enhanced social distancing scheme, especially in the greater Seoul area.

"Since we are in a very grave situation, we will review options of raising the level of social distancing measures," Vice Health Minister Kim Ganglip said.

The Level 2 distancing measures are applied if daily average local infections are between 50 and 100 over a two-week period.

Under the Level 2 guideline, the government can issue an administrative order that limits or bans mass gathering events. Facilities with high infection risks could be closed. 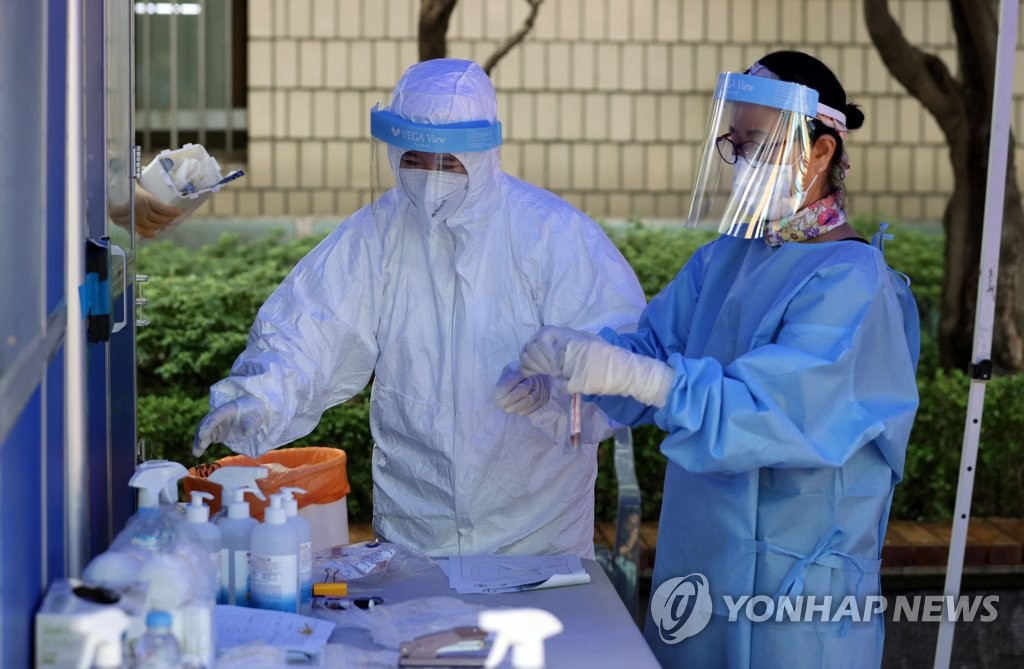 The portion of virus patients with unknown infection routes has also prodded the country to raise its social distancing level.

Over the past two weeks, 13.4 percent of the newly added patients had unknown infection routes, far exceeding the 5 percent threshold for Level 1 social distancing.

Health authorities are keeping their guards up especially this weekend as many South Koreans are expected to go outside during the three-day holiday period around Liberation Day.

Many citizens are also expected to go on summer vacation after heavy downpours that gripped the country over the past few weeks.

Some civic groups have also planned for mass-gathering rallies in Seoul on Liberation Day Saturday despite the city's administrative order forbidding such gatherings.

"Although freedom of assembly should be respected, we must first consider people's health and safety in this serious virus situation," Prime Minister Chung Sye-kyun said. "We urge people to follow virus-prevention measures thoroughly during the upcoming holiday period."