SUWON, South Korea, Aug. 14 (Yonhap) -- The leader of a minor religious sect at the center of the early coronavirus outbreak in South Korea was indicted Friday for allegedly obstructing the government's efforts to contain the spread of the pandemic.

Prosecutors in Suwon, south of Seoul, indicted Lee Man-hee, the leader of the Shincheonji Church of Jesus, and 11 other sect officials.

Lee, 89, is accused of submitting false documents to health authorities on the locations and number of participants at Shincheonji's gatherings in February when the sect was blamed for spikes in the COVID-19's spread in the country.

He is also accused of embezzling 5.6 billion won (US$4.68 million) from church funds and holding unauthorized religious events from 2015-19. Lee was arrested on Aug. 1.

Some 4,000 followers, most of whom were from its branch in the southeastern city of Daegu, were infected with the COVID-19 virus.

Eleven Shincheonji officials were also indicted Friday on charges of destroying evidence or forging documents for construction permits. They have not been detained.

On July 28, seven officials from the group's headquarters were indicted on charges including violation of the infectious disease control law and obstruction of justice. Three of them were arrested on July 8. 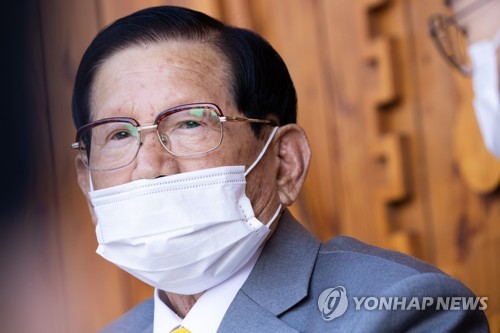