In their messages, the two men expressed their desire to further deepen bilateral ties based on the agreement for cooperation reached during their first summit in Russia's Far Eastern city of Vladivostok in April of last year, according to the North's official Korean Central News Agency (KCNA).

According to the KCNA, Kim said in his message that the cooperative relations between the two countries "would steadily grow strong at a higher level" based on the summit agreement reached in April of last year.

Kim also wished Putin "bigger success in his responsible work" for building a powerful Russia and the prosperity of its people.

The KCNA cited Putin as saying that the North Korea-Russia agreement from last year "contributes to further developing the reciprocal cooperation and promoting peace and security on the Korean Peninsula and throughout the Northeast Asian region."

Kim traveled to the Russian border town of Vladivostok in 2019 for his first-ever summit with Putin. They agreed to boost bilateral cooperation in various areas. 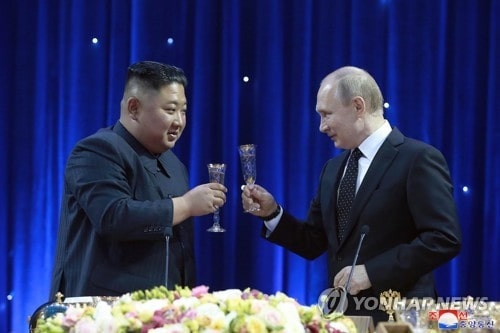