SEOUL, Aug. 15 (Yonhap) -- Police said Saturday that they will probe all participants of demonstrations held in downtown Seoul on the day to look into whether they violated a court decision related to COVID-19 and other regulations.

The number of participants reached more than 20,000 people, according to an estimation by police and demonstration organizers.

Ahead of the demonstrations, a Seoul court mostly upheld the local government's order to ban large gatherings in light of public safety concerns, and police have warned they will not permit unlawful protests.

Despite concerns over fresh outbreaks of the coronavirus and the court decision, far-right groups, such as the April 15 Rigged Election association, and unionized workers held packed demonstrations late in the day amid heavy rains.

The government announced the new COVID-19 confirmed cases earlier in the day before the groups' demonstrations.

New COVID-19 cases in the country reached a five-month high of 166 due to a surge in confirmed cases in greater Seoul.

The daily tally marks the second day in a row that infection numbers reached triple digits, with the total caseload in the country hitting 15,039, according to the Korea Centers for Disease Control and Prevention (KCDC).

Of the new cases, 155 were local transmissions, with churches being cited as outbreak clusters.

Reflecting the rise in numbers, the government raised the three-tier social distancing scheme in Seoul and Gyeonggi Province from Level 1 to Level 2, effective Sunday.

The move bans all large-scale indoor and outdoor gatherings.

Health Minister Park Neung-hoo warned that health authorities have not been able to track 14 percent of all new cases confirmed to a source and that the country may be close to experiencing another large-scale outbreak.

Sarang Jeil Church, led by far-right pastor Jun Kwang-hoon, and the Freedom Union went ahead with a rally to blast the government and the ruling Democratic Party near Gyeongbok Palace.

Health authorities have said that over 130 people who go to the church in Seoul have been confirmed to be infected with COVID-19. 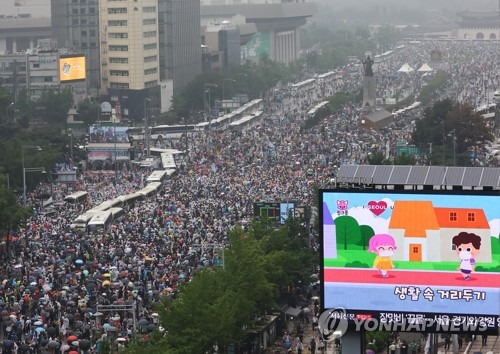 The church and the Freedom Union, consistently blasting many of the incumbent administration's policies, urged followers on YouTube to join the protest.

Besides churchgoers, a protest organized by former lawmaker Min Kyung-wook, who leads the April 15 Rigged Election association, was held, with about 1,000 supporters joining.

The group initially reported that 4,000 people would take part in the gathering that calls for a thorough probe into "irregularities" surrounding the last general election, which some members claim was rigged.

Some of the participants in the protests led by anti-government groups shared food with each other sitting in a circle on the ground.

Other than anti-government groups, the Korea Confederation of Trade Unions (KCTU) held a separate protest near Anguk Station and Bosingak, with around 2,000 unionized workers calling for the implementation of the inter-Korean agreement, the halt of South Korea-U.S. military drills, and a stop to workers' dismissals.

The union said it took steps to prevent the spread of the virus, such as by distributing masks and checking the body temperature of participants.

Police said they were taking all appropriate measures to safely control rallies that had not been approved by the court while keeping close tabs on those that had gotten permission.

The April 15 Rigged Election group was allowed to carry out its rally, while the Freedom Union and the umbrella union were not given permission.

Among participants in the far-right group-led protests, eight were reported to be arrested on the charge of assaulting police officers. 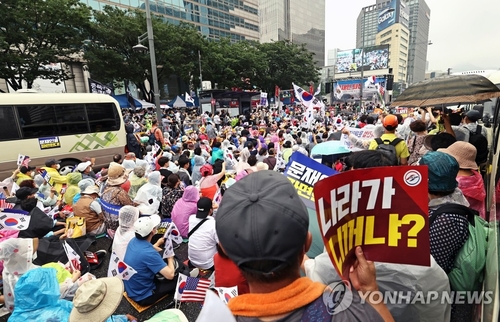