SEOUL, Aug. 16 (Yonhap) -- South Korea's new coronavirus infections jumped to a five-month high of 279 on Sunday due mainly to a surge in church-related cases in the greater Seoul area.

This brought the country's total caseload to 15,318, according to the Korea Centers for Disease Control and Prevention (KCDC). Of the total, 267 were locally transmitted cases.

It marked the highest figure since March 8 when the new daily infections stood at 367 after hitting a record high of 909 on Feb. 29, with Daegu and its neighboring North Gyeongsang Province at the center of the mass outbreak.

It also marked a three-digit number for the third straight day, following 103 infections Friday and 166 Saturday. 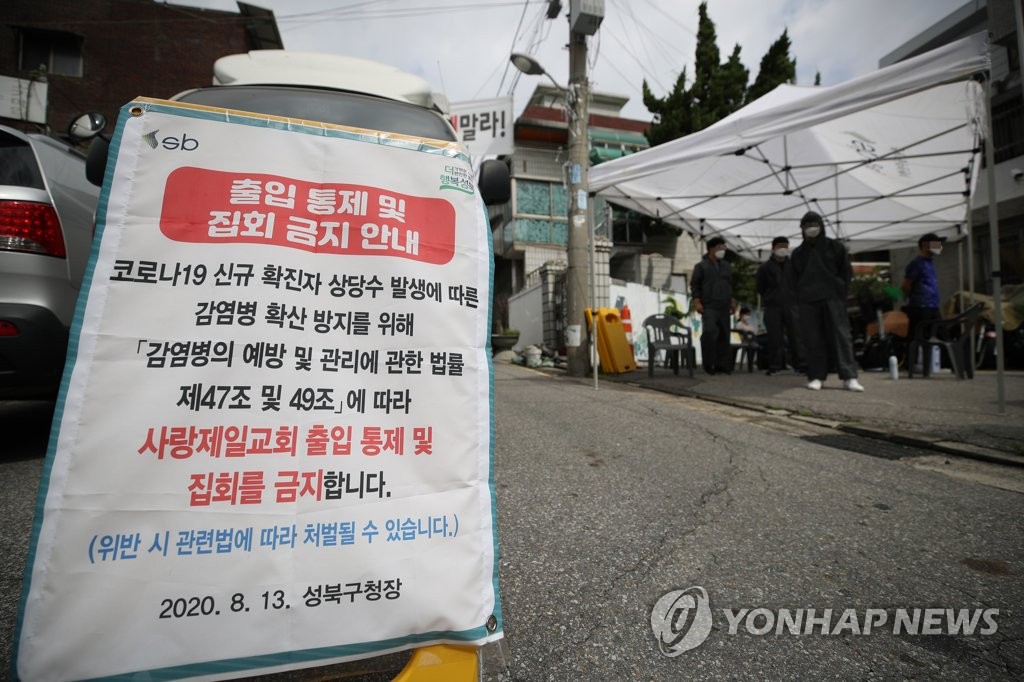 Alarmed by a resurgence of infections in recent days, the government raised social distancing in Seoul and its neighboring areas by one notch to Level 2 in the three-tier system Sunday for two weeks.

But health authorities are concerned about the further spread of the virus out of the capital area because sporadic cluster infections have shown no signs of letting up.

The authorities said the country appears to be reentering another round of infections.

"The current situation appears to be the early stage of another round of massive infections, and unless the spread of the virus is contained as much as possible, there will be a serious impact," Health Minister Park Neunghoo told a press briefing. 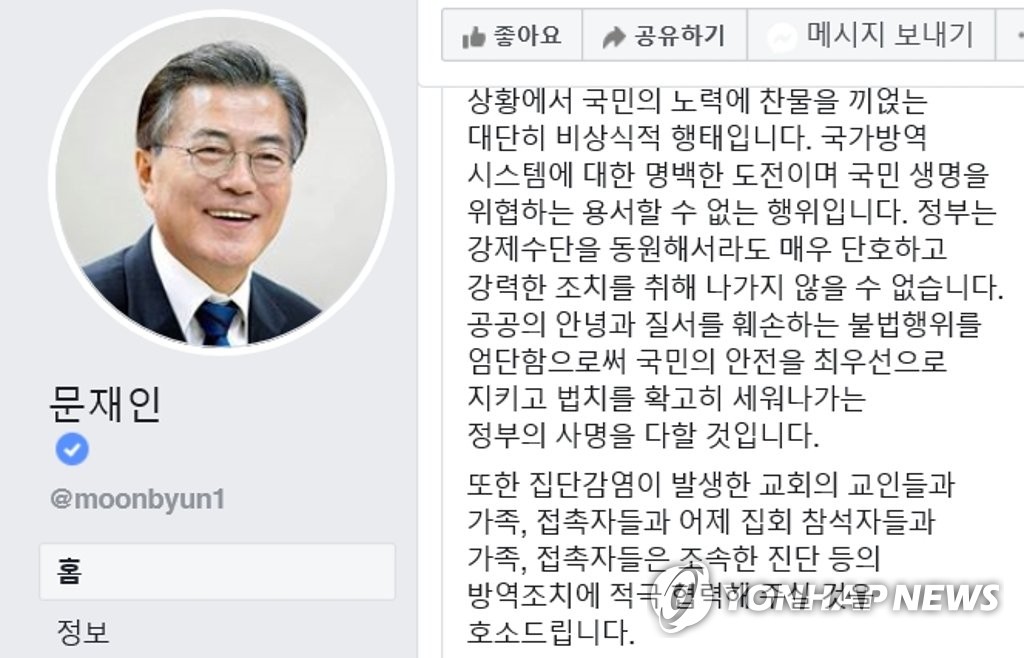 As the new daily cases spiked to a five-month high, President Moon Jae-in instructed officials to employ every possible means to contain the spread of the new coronavirus, calling the situation "very critical."

"We are at a very critical juncture. The government should mobilize every possible means to stem the spread of the new coronavirus," Moon was quoted as saying by his spokesperson Kang Min-seok.

The president made the call after being briefed about the results of an emergency government response meeting presided over by his chief of staff Noh Young-min.

He also vowed to take stern measures against any unlawful acts that could hamper the government's efforts to fight the virus.

The warning came after pastor Jun Kwang-hoon and other members of the Sarang Jeil Church in Seoul took part in massive anti-government rallies held in downtown Seoul on Saturday in violation of self-quarantine rules. They were supposed to be quarantined after more than 100 COVID-19 patients were traced to the church.

As of 2 p.m., infections tied to the church have swelled to 249 nationwide, the KCDC said, adding that the figure is feared to grow as thousands are undergoing virus tests.

The central government and the Seoul metropolitan government said they will separately file a complaint against Jun for allegedly violating self-quarantine rules and hampering the authorities' efforts to constrain the spread of the pandemic.

The government asked members of the church to take coronavirus tests as quickly as possible, noting that a quarter of the people from the church who underwent the tests have been confirmed to be infected with COVID-19. If they do not follow the guidelines, they will be reported to the police, it said.

Jun has reportedly not taken the virus test yet. 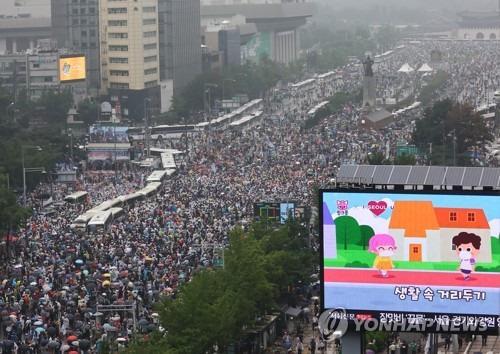 Cases linked to the Woori Jeil Church in Yongin, south of Seoul, meanwhile, increased to 126, while a church in Seoul's western ward of Yangcheon has reported seven patients.

Seventeen new coronavirus patients were confirmed in relation to a Starbucks store in Paju, north of Seoul, on Sunday, raising the total number of cases tied to the coffee shop to 40.

In the southwestern city of Gwangju, 682 bars and clubs were ordered to shut down for 10 days as of 7 p.m., after nine cases were reported in relation to a nightlife district in the city.

Twelve people arriving from abroad were also confirmed to have the virus Sunday, up from 11 cases a day earlier.

South Korea reported no additional fatalities, keeping the death toll at 305. The fatality rate was 1.99 percent.

The total number of people released from quarantine after making full recoveries stood at 13,910, up nine from the previous day. 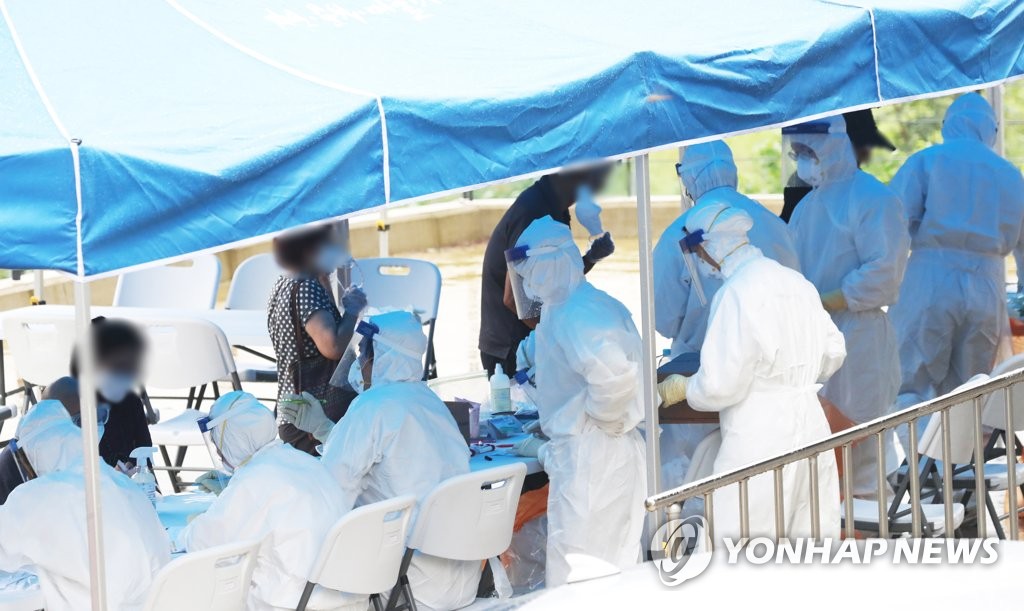