SEOUL, Aug. 16 (Yonhap) -- The military authorities collected two wooden-boxed landmines in inter-Korean border areas, which were presumed to have been swept away from North Korea due to the recent heavy rain, officials said Sunday.

Since earlier this month, front-line military units have carried out operations to detect and remove landmines in border areas, which could have made their way south due to swollen water levels following the recent heavy precipitation.

So far, two wooden-boxed mines operated by the North Korean military were collected near the western island of Yeonpyeong and the Inje county in Gangwon Province, along with 17 landmines laid by the South Korean military, according to Seoul's Joint Chiefs of Staff (JCS).

"The landmines from North Korea do not have chances of exploding. But we ask citizens to pay extra caution to those objects, as they do not look like explosives on the surface" a JCS official said.

Starting Monday, the military plans to expand the mine removal operations by mobilizing hundreds more service members and equipment in cooperation with the U.S. Forces Korea (USFK) to help citizens return to their everyday lives safely, he added.

In recent weeks, South Korea experienced heavy downpours, mostly in central regions, which killed 37 and left five others unaccounted for, according to the disaster headquarters. 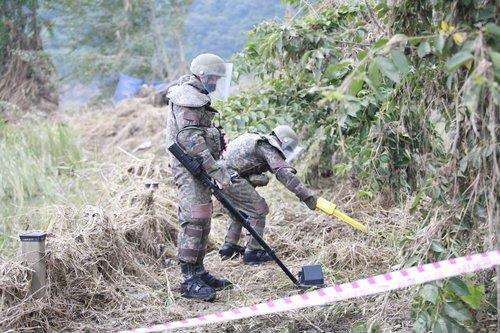