If the trend continues, Genesis will regain its top spot in local luxury vehicle sales for the first time in four years.

According to the data, Hyundai sold a total of 60,005 Genesis vehicles in the January-July period in South Korea, up 65 percent from the same period last year,

In comparison, Daimler sold 41,583 Mercedes-Benz vehicles during the seven-month period in South Korea, up 3 percent from the same period last year.

Hyundai launched the Genesis brand in 2015, and the premium brand became the top-selling luxury brand in 2016.

But Mercedes-Benz had unseated Genesis since 2017.

The Genesis brand has gained popularity since Hyundai began selling the GV80 sport utility vehicle in January this year.

In the first seven months of this year, Hyundai sold 20,016 GV80 vehicles and is on pace to surpass the sales target.

The GV80 is the fourth model of the Genesis lineup, which is currently composed of the G70, G80 and G90 sedans.

The three-row, rear-wheel-drive SUV is equipped with a 3.0-liter diesel engine and various advanced features for safety and convenience, Hyundai said.

The GV80 boasts semi-autonomous driving and forward collision-avoidance assist-junction turning technology, the latter of which helps prevent collisions with vehicles coming from the front when turning left at intersections. It also has electronically controlled suspension with road preview, alerting the driver to road conditions ahead using cameras and navigation systems. 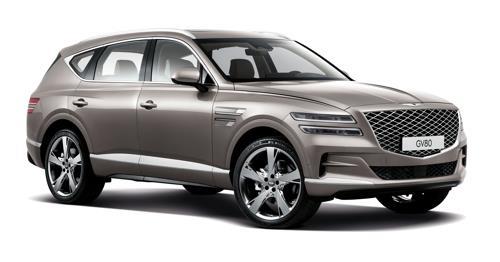