SEOUL, Aug. 18 (Yonhap) -- Eastar Jet Co. on Tuesday began the process to find a new owner after Jeju Air Co. scrapped its plan to acquire the smaller budget carrier amid the new coronavirus' impact on the airline industry.

"On top of the selection of lead managers, the company is in talks with two (homegrown) private equity funds to sell the majority stake to the PEFs before being placed under court receivership," he said.

Eastar faces bankruptcy after Jeju Air scrapped the deal in late July due to the rising COVID-19 pandemic-related uncertainties.

In response to Jeju's decision, Eastar said Jeju Air violated terms of the deal and will seek every possible measure to make Jeju take responsibility for the deal's collapse.

"There is no progress in resolving the dispute with Jeju Air," Kim said.

The Ministry of Land, Infrastructure and Transport demanded Eastar come up with a Plan B and said it will make efforts to avoid massive job losses. The carrier hires about 1,500 employees.

Analysts expect Eastar will go bankrupt if there are no viable investors to take over the carrier, which has suspended all flights since March.

The deal had been at risk of falling through despite the government's intention to support it as the two sides failed to narrow differences on terms of the contract.

But Eastar failed to meet the demands. The company said the debt payment is not part of the deal and that it is not Eastar's duty, but Jeju Air's.

On July 23, the state-run Korea Development Bank (KDB) and the Export-Import Bank of Korea said they will withdraw their plan to extend loans worth 170 billion won to Jeju following the deal's collapse.

The state lenders were planning to inject the capital into Jeju Air to help it take over Eastar and ride out the virus crisis.

As for possible loans to Eastar, the KDB said on July 23 that it was not considering providing financial support for Eastar. 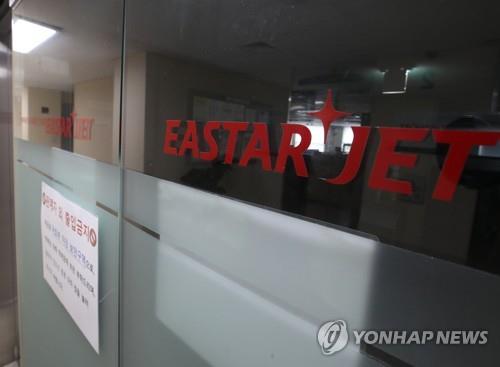