SEOUL, Aug. 19 (Yonhap) -- North Korea was set to hold a key Workers' Party meeting on Wednesday as the country is struggling to cope with flood damage and stave off an outbreak of the coronavirus.

On Tuesday, the North's official Korean Central News Agency reported that a plenary meeting of the Workers' Party will be held Wednesday "in order to discuss and decide on an issue of crucial significance in developing the Korean revolution and increasing the fighting efficiency of the Party."

The KCNA did not provide further details, including what exactly will be discussed during the meeting, but observers expect that the session could be focused on organizational issues, given that the North has recently held party meetings to discuss launching a new party organization.

The meeting comes after leader Kim Jong-un presided over an executive policy council meeting of the Worker's Party earlier this month and decided to launch "a new department within the Central Committee of the Party."

Last week, the North also held a politburo meeting to decide on setting up a new department in the Central Committee and defined its function and role, saying that the newly established organization will "make tangible contribution to safeguarding the dignity and interests of the state and people."

Another issue likely to be addressed during the meeting is how to improve the lives of its people struggling to cope with the fallout from a protracted anti-virus campaign and damage caused by recent heavy downpours.

During last week's politburo meeting, leader Kim Jong-un said that he cannot let his people celebrate the 75th party founding anniversary on Oct. 10 "homeless," and set forth tasks to "eradicate the damage of the flood and bring the living of the people to normal at an early date," the KCNA said.

According to state media reports, a total of 39,296 hectares of crops were damaged by the recent flood, while at least 16,680 homes and some 630 public buildings were flooded or destroyed across the country. Many roads, bridges and railways were also damaged.

Wednesday's party meeting marks the first time in about eight months that the North has held a plenary session of the Central Committee since leader Kim presided over a rare multiple-day plenary session late last year.

During last year's meeting, Kim threatened that the world will soon witness a "new strategic weapon" and warned of "shocking actual action," accusing the U.S. of dragging its feet in talks for its own political interests. 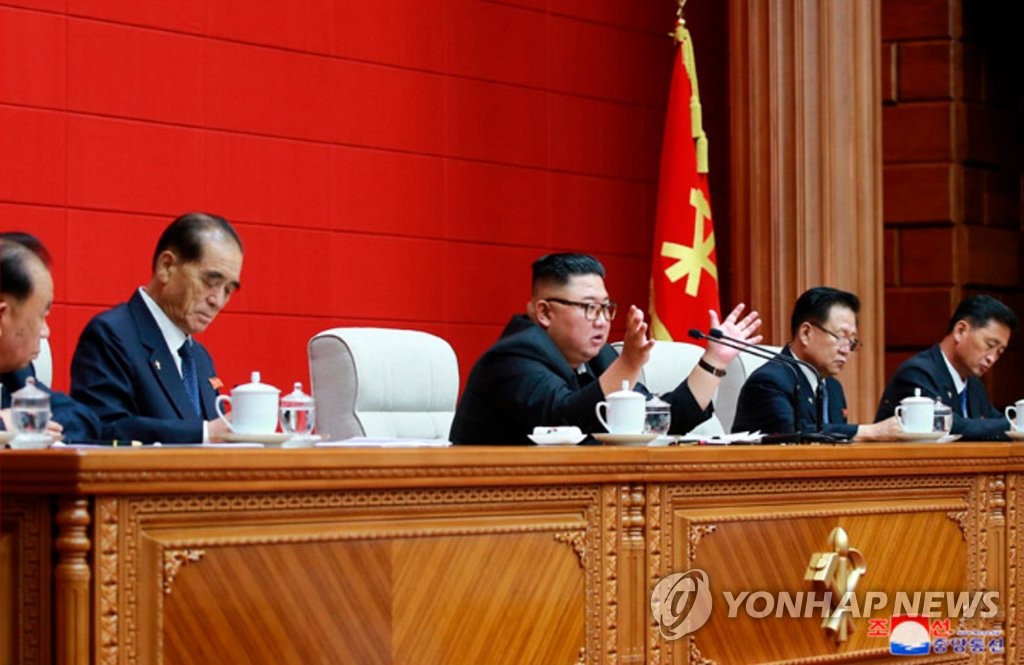