SEOUL, Aug. 19 (Yonhap) -- Seoul's weekly Wednesday rally to call for Tokyo's apology and compensation for Korean victims of Japan's wartime sex slavery was held with a minimal number of participants attending, due to the recent spike in new coronavirus infections, its organizer said.

This week's 1,453rd Wednesday protest rally was held in front of the former Japanese Embassy site in central Seoul with the attendance of only six civic activists, the Korean Council for Justice and Remembrance for the Issues of Military Sexual Slavery by Japan said. 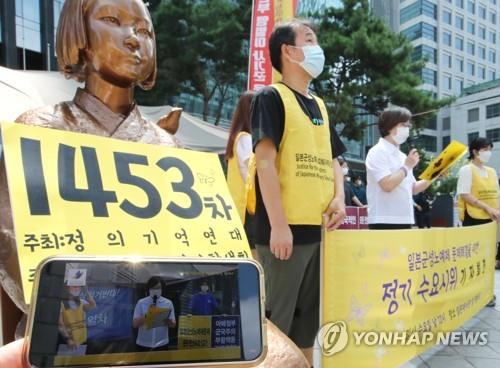 Instead, supporters of the sex slavery victims, euphemistically called comfort women, were asked to watch the event live on YouTube, the activist group said.

Unlike in the past, the council didn't play an iconic song for comfort women at the latest rally and ensured that the six participants maintained sufficient distance among one another.

On Wednesday, South Korea added 297 more COVID-19 cases, including 283 local infections, which is the largest number of new infections since early March, raising the total caseload to 16,058, according to the Korea Centers for Disease Control and Prevention.

In a public notice, the council asked its supporters not to come to the rally site but to watch its livestream on YouTube as a precautionary measure against the pandemic.

Council activists who led the on-site rally read a poem sent from Sydney in commemoration of Jan Ruff O'Herne, a late Australian comfort woman who testified about Japan's acts of wartime sexual slavery for the first time in 1992 as a non-Asian victim.

Meanwhile, five members of another civic group demanding the removal of the bronze Statue of Peace located just across from the former site of the Japanese Embassy also held separate one-person rallies nearby.

Weekly rally for sex slavery victims scaled down due to virus

Weekly rally for sex slavery victims scaled down due to virus