SEOUL, Aug. 19 (Yonhap) -- Unification Minister Lee In-young called Wednesday for China to play a "constructive" role in the resumption of inter-Korean dialogue and to help bring permanent peace and stability to the Korean Peninsula.

Lee made the remark during his first meeting with Chinese Ambassador to Seoul Xing Haiming after his inauguration last month, underlining the need for the two countries to cooperate with North Korea in tackling the coronavirus pandemic.

"Now, inter-Korean relations have been in a stalemate for quite a long time but we believe that under any circumstances dialogue should continue and therefore our government wants to make much efforts to put inter-Korean dialogue back on track," Lee said at the start of the meeting.

Inter-Korean relations have been stalled since the no-deal nuclear summit between the North and the U.S. early last year. The ties got worse recently when North Korea blew up a joint liaison office in its border town of Kaesong in anger over anti-Pyongyang leaflets flown from the South.

Lee said that the geographical proximity of the two Koreas and China makes it necessary for the three countries to cooperate against the global coronavirus pandemic, saying they should make joint efforts in the face of such public health threats in the region.

Lee also called on China to support his plans to "develop inter-Korean relations into a peaceful, economic and biotic community" through humanitarian cooperation and small-scale trade, the ministry said in a statement after the meeting.

Since taking office, Lee has pushed for the bartering of rice and medicine from the South for mineral water from the North as a "creative" way to avoid violating sanctions on the North while expanding cross-border exchanges.

Xing expressed Beijing's "firm" and "unwavering" support for denuclearization, peace and eventual reunification on the Korean Peninsula, which he said would benefit not just the people here but the people in China.

The ambassador also said that inter-Korean relations are important but no less important is to move forward the stalled relations between the U.S. and North Korea, saying that they should go hand-in-hand and that Beijing will provide support to make it happen. 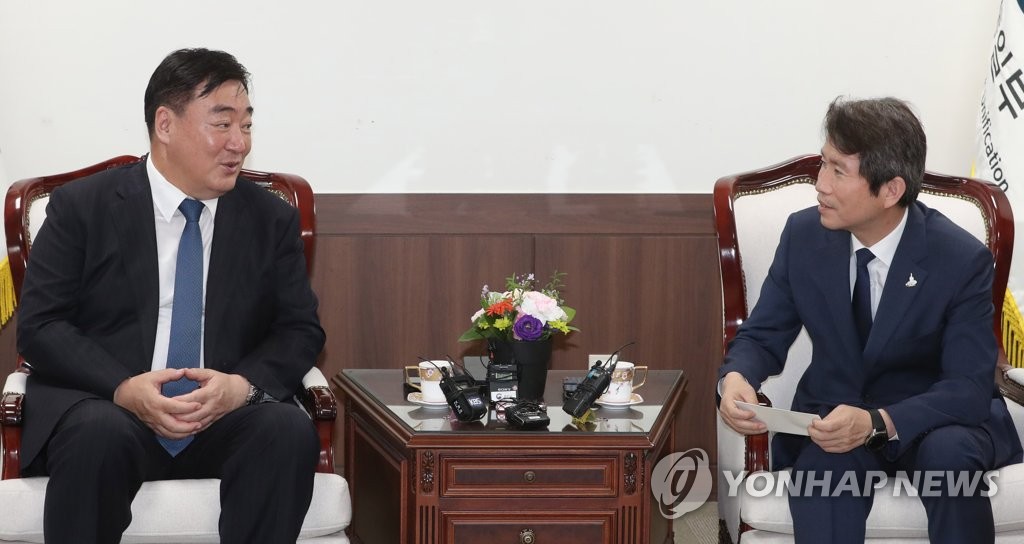