SEOUL, Aug. 19 (Yonhap) -- The number of schools closed temporarily due to the coronavirus outbreak rose to 689 nationwide Wednesday, the highest number over the past three months, authorities said, as the nation has been beleaguered by a recent spike in new infections.

The Ministry of Education said the about 700 kindergartens and elementary, middle and high schools in Seoul and five other regions suspended in-person classes as of 10 a.m. 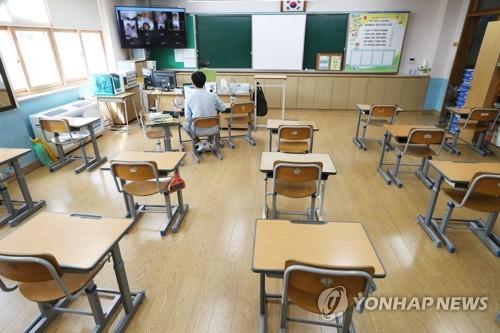 It is the highest number of school closures since May 29, when 830 schools were shut down following the outbreak of cluster infections at logistics warehouses.

The latest shutdown figure marked a sharp rise considering only three schools were closed nationwide as recently as July 31.

In Seoul, 107 schools shifted to online classes amid a steady rise in new COVID-19 patients traced to a church in the northern part of the capital.

In Gyeonggi Province, which surrounds Seoul, 257 schools were closed and are offering online classes. Busan, the southern port city, reported closures of 313 schools.

Since in-person classes resumed at elementary and secondary schools on May 20, 160 students and 30 school personnel had tested positive for the virus as of Tuesday.

Three-month high of 689 schools closed nationwide due to coronavirus

Three-month high of 689 schools closed nationwide due to coronavirus