SEOUL, Aug. 19 (Yonhap) -- South Korean doctors vowed to move forward with their nationwide strike planned for next week, despite a spike in the number of new coronavirus cases, the country's medical association said Wednesday.

The announcement came after Health and Welfare Minister Park Neunghoo and Korea Medical Association (KMA) chief Choi Dae-zip made little headway in their talks in Seoul earlier the day, the doctors' group said.

The KMA had said its members will stage a walkout from Aug. 26 through Aug. 28 to protest the government's medical reform plan. This follows a one-day strike carried out last Friday, which marked the third major walkout in the past two decades, after those in 2000 and 2014.

Park said after the talks that that there were differences in views.

"The government suggested the opening all possibilities (for talks), but doctors insisted on scrapping the reform plan before any discussions can take place," the policymaker said. He said Seoul is still open to finding ways to ease disparity in medical services offered in rural areas, and hinted that the health ministry can discuss making adjustments to its proposal in future negotiations with doctors. The ministry said every effort will still be made to hold talks going forward to iron out differences.

Seoul said it wants to increase the number of doctors to improve weak medical infrastructure in rural areas, as well as better cope with pandemics, such as COVID-19, which is not likely to end soon and may continue to pose health challenges.

Under the new medical workforce program, the health ministry is planning to expand admission quotas at medical schools by 4,000 over the next 10 years starting in 2022, and open a new public medical school. This scheme will increase the number of students admitted annually to medical schools to 3,458 in the 2022-2031 period from the current 3,058.

Regarding the talks, the KMA said in a statement released after the two hour meeting that both sides only repeated their previously held positions. It said under such circumstances the strike will proceed as planned.

"It is regrettable that even with some 2,700 medical students threatening to boycott the state licensing exam, and many trainee doctors, such as interns and residents, submitting their resignations, the government is not changing its stance," a KMA spokesperson said. 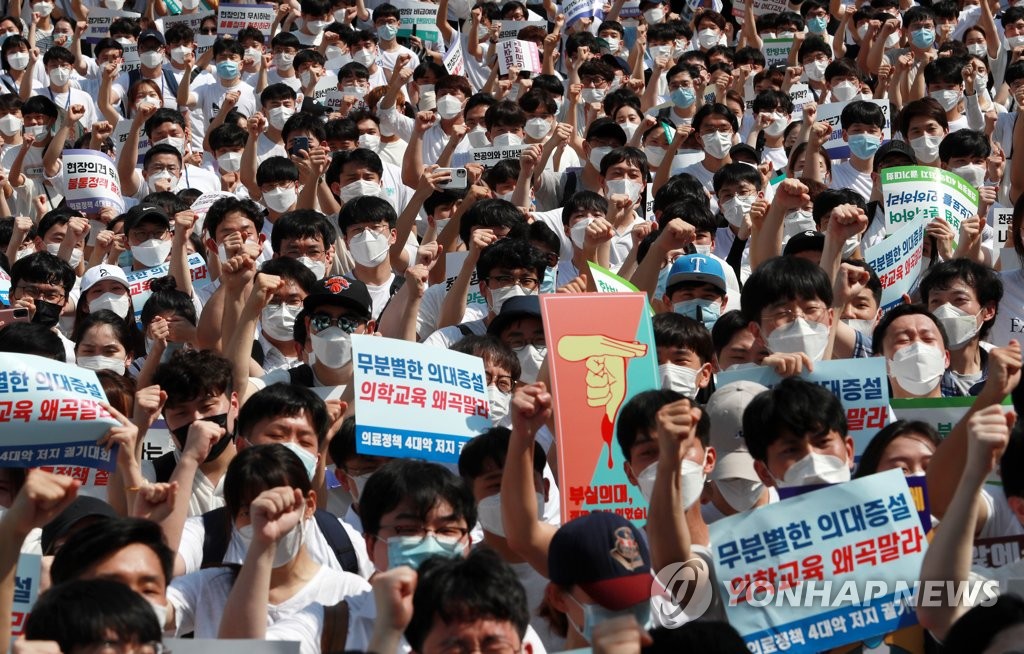 The breakup in talks comes as South Korea reported 297 new infections, the largest number of cases since early March, which has raised the country's total caseload to 16,058, according to the Korea Centers for Disease Control and Prevention.

Infections were reported at various facilities, including several churches in the capital,

Reflecting the increase, the government raised the social distancing level by one notch over the weekend and on Tuesday announced a decision to prohibit churches in Seoul and nearby areas from carrying out all in-person activities.

Doctors to push forward with nationwide strike despite COVID-19 surge

Doctors to push forward with nationwide strike despite COVID-19 surge