The remark from Lt. Gen. Richard Clark, deputy chief of staff for strategic deterrence and nuclear integration, came shortly after the U.S. said it flew a number of U.S. bombers near the Korean Peninsula this week.

"They are there to assure our allies, to make sure that they understand that our bomber force is capable, is ready, and that it is a flexible, visible force that is there as not only a deterrent measure, but also an assurance measure for our allies," Clark said in a webinar hosted by the Mitchell Institute for Aerospace Studies. 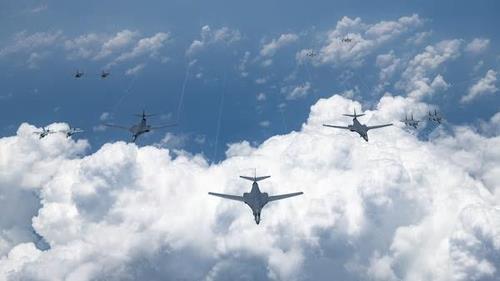 Clark said such missions allowed the U.S. Air Force to train and exercise with its partners, "so that they are prepared to execute their mission as necessary."

He said he was not sure whether the U.S. will hold a joint bomber exercise with South Korea in the future when asked, but said its drills in the area will help prevent and prepare for any conflict in the region.

"I do know that it helps us to be a much more credible, capable force, not only from a conventional standpoint, but also a nuclear standpoint to provide that deterrent effect that we are after," he told the virtual meeting.

Clark also highlighted the need to be prepared for both the conventional and nuclear capabilities of North Korea.

"North Korea, another threat, their development of nuclear weapons in their pursuit, could put us in a position where we start in a conventional fight, (then) we find ourselves in a nuclear environment. And the fact is, we cannot stop the fight just because our adversary decides whether limited or large scale nuclear, we have to be able to fight through that along the full spectrum conflict," said the Air Force general.