SEOUL, Aug. 20 (Yonhap) -- The resurgence of the new coronavirus in the greater Seoul area has dealt a critical blow to the country's media industry, temporarily shutting down a regular radio show and halting filming of a TV series.

CBS, a Seoul-based Christian TV and radio station, canceled its regular radio programming as one of its reporters tested positive for COVID-19 on Tuesday, making it the first case of a shutdown of a major broadcaster due to COVID-19.

While the reporter appeared on a radio show Monday, all crew members and guests of the program, including former Prime Minister Lee Nak-yon, have been quarantined and gotten tested. Lee tested negative for the virus but has to go through a two-week self-quarantine.

The broadcaster evacuated the building for disinfection, while its live programs were replaced with music streaming for about two days.

CBS said it resumed its regular programming at noon Thursday as all staff members of the radio program have tested negative.

The radio show will be emceed by a temporary figure until the main host completes her two-week self-quarantine, it added. 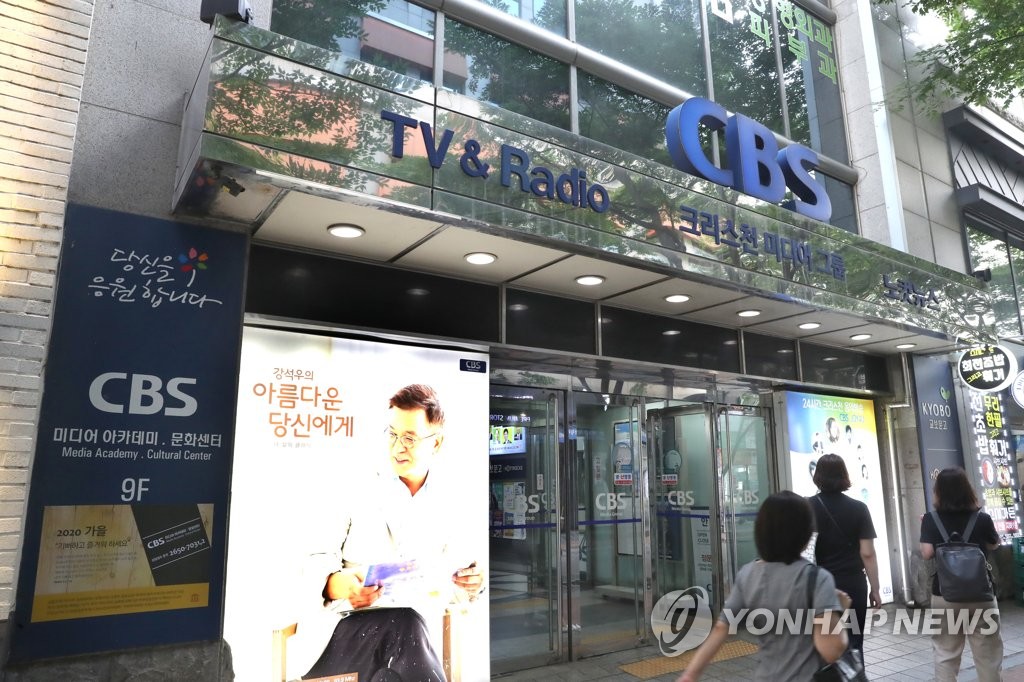 SBS, one of the three terrestrial broadcasters in South Korea, also shut down one of its buildings in Seoul on Thursday due to a COVID-19 outbreak.

It said a teacher of a child care center in SBS Prism Tower in northwestern Seoul has tested positive and the building will be closed until the next day.

All people who have been in the same places with the patient are isolated and will be virus-tested, it added.

But SBS noted its regular broadcasting will not be affected by the outbreak as its main studios are located at its headquarters in Mokdong, western Seoul.

Moreover, the fantasy romantic comedy "To All The Guys Who Loved Me" on KBS halted the filming Wednesday after an extra was confirmed to have contracted the virus.

KBS said all staff members who were at the filming site have been isolated and tested, while lead actress Hwang Jung-eum has reportedly not come into contact with the patient.

It is considering rescheduling the 16-episode series, which has just two episodes left to air

Two actors, Kim Won-hae and Heo Dong-won, starring in the same theatrical play with the infected walk-on, have tested positive for COVID-19, according to their agencies. But their managers have received negative results, they added.

In addition, actor Oh Man-seok, who appears on JTBC's variety show "Just Comedy," is under self-quarantine after having contacted the patient and is awaiting the test result, according to the broadcaster.

JTBC said it suspended the filming of "Just Comedy" and disinfected the building.

EBS, a South Korean educational television and radio network, has also reported three coronavirus cases in one of its shows, including one producer.

Insiders pointed out that the media community is highly prone to virus infection as a massive number of people gather to produce a show and they participate in multiple programs.

In March, when South Korea was suffering from the first wave of the COVID-19 outbreak, several TV programs were canceled after a producer of the food variety show "Bob Bless You" tested positive.

"We can't delay our schedules easily because we have to meet the deadline," a crew member of a TV show said. "Each staff member is cautious about a possible virus infection, but we can't restrain their private activities."

South Korea has reported more than 1,500 COVID-19 cases over the past week, most of which are community infections linked to church gatherings.