SEOUL, Aug. 20 (Yonhap) -- South Korea's health authorities are coming under growing pressure to impose enhanced coronavirus measures nationally as more new infections beyond the greater Seoul area are being reported amid concerns over the nationwide spread of the virus.

More than 1,500 cases have been newly identified over the past week, with daily infections staying in the triple digits since Friday, according to the Korea Centers for Disease Control and Prevention (KCDC).

While most cases have been reported in the capital area, home to half of the country's 51 million people, health authorities are raising their guard against the possibility of the disease spreading rapidly across the country.

Only two of the nation's 17 municipalities have yet to report new virus cases over the past week, but experts said it is just a matter of time before the country sees a flare-up in COVID-19 cases in every region. 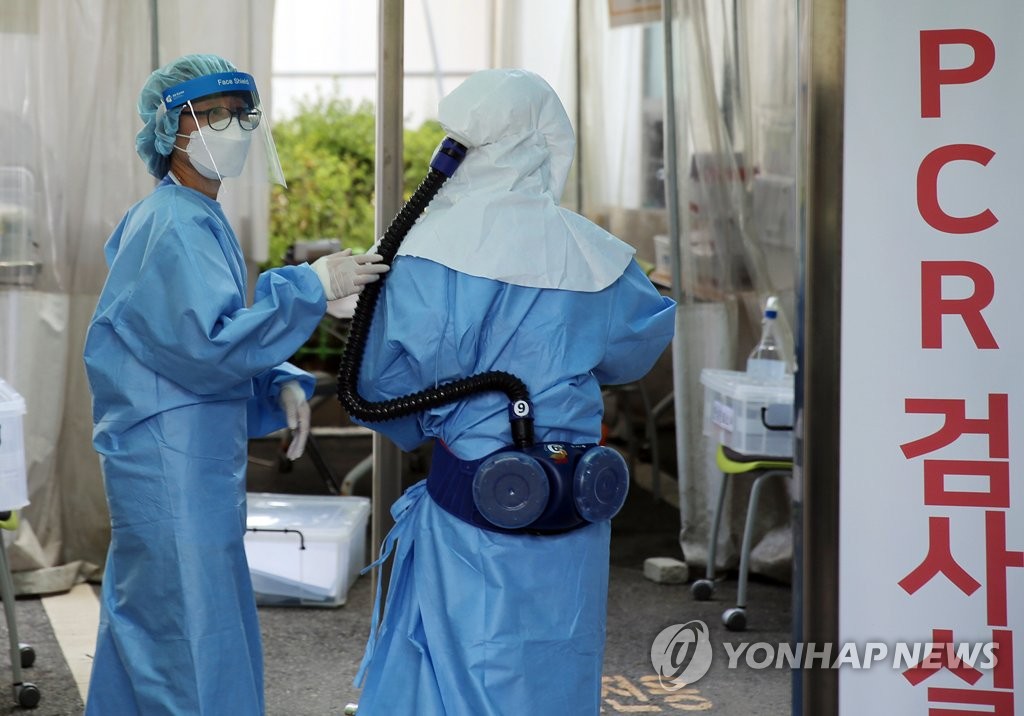 Among virus clusters, health authorities are especially keeping close eyes on hundreds of virus cases tied to the Sarang Jeil Church in northern Seoul as infections at 13 other facilities, including call centers, hospitals and office buildings, have been traced to the church.

So far, 676 cases are connected to the church, and 39 of them were detected in eight different municipalities outside the greater Seoul area.

Since some of the church followers attended the mass Liberation Day rally on Saturday at Gwanghwamun Square in Seoul, where people from various regions also gathered, health authorities believe more virus cases can be detected outside the capital area down the road.

Authorities estimate that some 1,600 people from Daegu, 750 from Daejeon, 500 from Ulsan and 200 from North Jeolla Province participated in the rally.

So far, 53 cases have been confirmed to have originated from the weekend march. They were detected in nine different municipalities, according to the authorities.

"We are especially concerned about the virus spreading through the rally where many unspecified people gathered," Health Minister Park Neung-hoo said. "We desperately need people's cooperation to stop the nationwide spread of the virus that stemmed from massive infections from churches."

Health authorities have been struggling to trace potential virus cases tied to the church and the weekend rally, raising concerns that the virus spread cannot be easily contained. 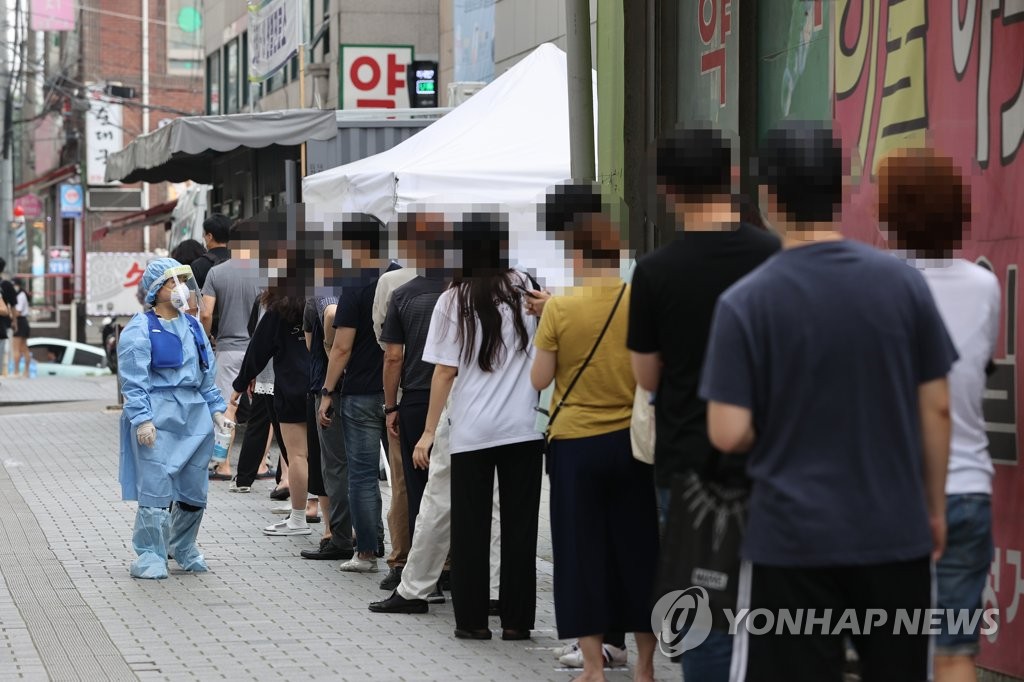 Health authorities are working with police and municipal governments to boost contact tracing efforts in regards to virus cases from the rally.

"We are trying to identify people who attended the rally by securing a list of chartered bus users, and analyzing mobile data records, but it is very difficult to know who exactly went there," Vice Health Minister Kim Ganglip said in a daily briefing. "Against this backdrop, we must consider a possibility of the massive spread of the virus."

Infectious disease experts said the government should now consider enforcing the Level 2 social distancing measures across the country to stem the nationwide spread of the virus.

Currently, the second-highest level of social distancing has been enforced in the greater Seoul area that includes Gyeonggi Province and Incheon.

"South Korea is not a big country," said Lee Jae-gap, a doctor at Hallym University Hospital. "In this kind of situation, it is better to enforce the Level 2 measures nationwide." 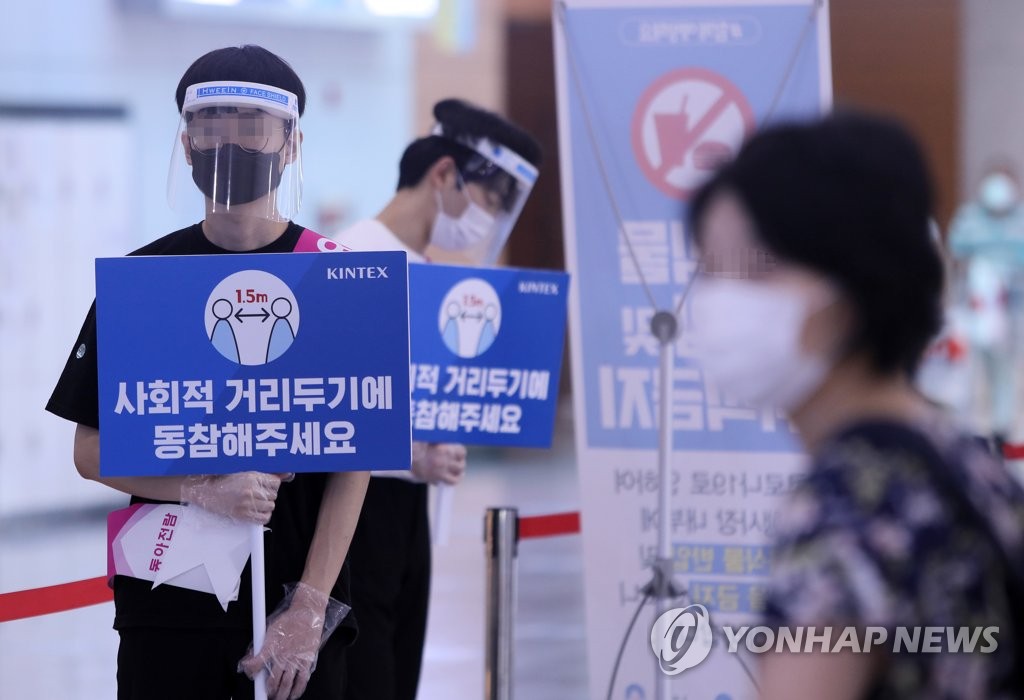 Some experts said the government should adopt the highest Level 3 distancing in the greater Seoul area as infections in the densely populated area show no signs of letup.

However, health authorities said they have yet to discuss the options of applying the Level 3 distancing in the wider Seoul area as they need to consider social and economic impacts from the toughest social distancing scheme.

"The virus situation in the capital area has yet to meet the requirements for the Level 3 distancing," Vice Health Minister Kim said. "We always deal with the temptation of enforcing stricter measures, but even at this stage of the Level 2 distancing, we face various realistic difficulties."

The Level 3 social distancing can be applied if the country's average daily rise in local virus infections stays above 100 over a two-week period. The doubling of new daily virus cases should also occur at least twice in a one-week period.

All sports events are banned, and the operation of public facilities is suspended. Schools are required to shift to remote learning and to stop holding in-person classes.