SEOUL, Aug. 21 (Yonhap) -- Eastar Jet Co. will cut down on its workforce as part of efforts to find a new owner after Jeju Air Co. scrapped its plan to acquire the smaller budget carrier amid the coronavirus' impact on the airline business, industry sources said Friday.

Eastar plans to lay off nearly 70 percent of its 1,200 employees in restructuring before it begins the process to find a new investor, Eastar Senior Vice President Kim You-sang said over the phone.

"Our lead managers and two private equity funds (that have an interest in investing in Eastar) want the company to reduce our fleet and workforce among other things," he said.

Eastar currently has 18 planes, including two 737 MAX aircraft, and plans to reduce the fleet to five to seven planes, the executive said.

"We are also looking for a strategic investor, or a company, that has an interest in the majority stake in Eastar," he said.

In response to the decision, Eastar said Jeju Air violated terms of the deal and will seek every possible measure to make Jeju Air take responsibility for the deal's collapse.

"There is no progress in resolving the dispute with Jeju Air," Kim said.

Analysts expect Eastar will go bankrupt if there are no viable investors to take over the carrier, which has suspended all flights since March.

The deal had been at risk of falling through despite the government's intention to support it as the two sides failed to narrow differences on terms of the contract.

But Eastar failed to meet the demands. The company said the debt payment is not part of the deal and that it is not Eastar's duty, but Jeju Air's.

The state lenders were planning to inject the capital into Jeju Air to help it take over Eastar and ride out the virus crisis.

As for possible loans to Eastar, the KDB said on July 23 that it was not considering providing financial support for Eastar. 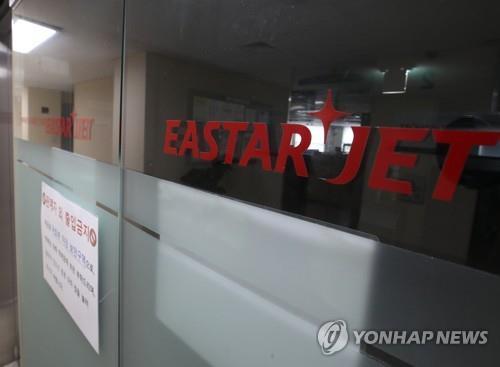