SEOUL, Aug. 22 (Yonhap) -- Seoul's coronavirus positivity rate soared more than sevenfold this month due to the outbreak of cluster infections throughout the capital area, the municipal government said Saturday.

It said Seoul's coronavirus positivity rate, which refers to the percentage of people who test positive for COVID-19 out of those who have been tested overall, surged to an all-time high of 4.27 percent in the third week of August. 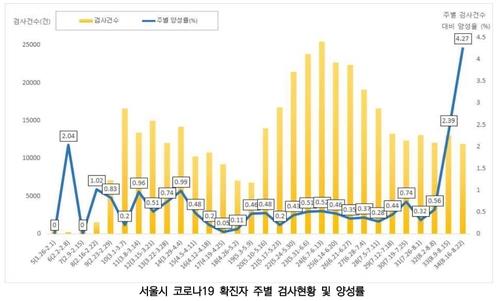 The latest statistics indicate one out of every 25 people taking the coronavirus test in Seoul yielded a positive result, it explained. The city's previous record positivity rate was set in the first week of February, when the figure stood at 2.04 percent.

In one instance of massive cluster infections, as many as 432 infections have been traced to members of a church in northern Seoul.

The coronavirus transmission rate, the number of new patients infected by a single virus carrier, has also marked a steep rise in Seoul.

The capital's transmission rate rose from 0.64 in the fifth week of July to 0.97 in the first week of August and 1.42 in the second week, the municipal government said.

Its transmission rate had remained below 1 for eight consecutive weeks from the third week of June.

The number of cases of the coronavirus in Seoul rose by 128 to 2,749 as of Saturday morning.