The single released at 1 p.m. Friday, Seoul time, debuted at No. 1 on the iTunes Top Songs chart in 104 countries and regions. The song also topped local music streaming charts as soon as it was published.

The bright, upbeat disco-pop track, sung entirely in English, is the group's latest release following the album "Map of the Soul: 7 — The Journey" released in Japan in July.

“Dynamite” MV hits 100 mln views in 24 hours, yet BTS is nervous to perform at VMAs

In a press conference held online Friday, the group said the song was a "refresh project" for themselves and was meant to sent out cheerful, bright messages for people across the globe who are going through a hard time due to the COVID-19 pandemic.

After the song's release, the septet had an interview with MTV's music program, Fresh Out Live, and is scheduled to appear on NBC's TODAY show on Aug. 24, local time.

It is also scheduled to perform the new single at the 2020 MTV Video Music Awards on Aug. 30 in its first-ever appearance on the awards show. 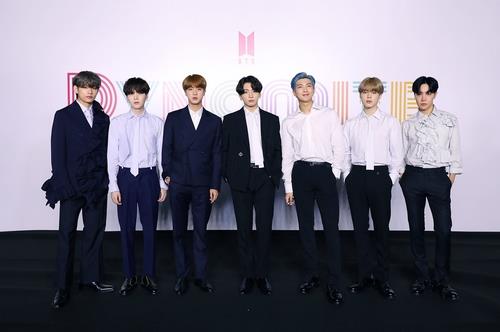