SEOUL, Aug. 22 (Yonhap) -- Seoul city government said Saturday that it has secured a list of more than 10,000 participants in last week's massive anti-government rally and is working to have all participants tested for the coronavirus.

The municipal government said it received the list of 10,576 people who attended the Aug. 15 rally in and around Gwanghwamun Square from the Central Disaster and Safety Countermeasure Headquarters. They are now being asked to get tested for the coronavirus, it said.

The disaster headquarters listed some 50,000 people in cooperation with telecommunication companies, who were at or near the protest sites from noon to 5 p.m. on Aug. 15 for longer than 30 minutes. It has sent out text messages to all the people on the list, asking them to get tested.

The health authorities have so far identified 104 coronavirus cases linked to the event, and warned that the number will continue to grow as more test results come in.

The city implored its citizens to cooperate with the quarantine efforts and to receive testing regardless of symptoms.

"Even if you did not participate in the protest, there is a possibility of infection. We seek active cooperation from citizens," said Park Yoo-mi, a health official from the city, adding that the text messages will be sent out until Sunday.

The city also got hold of the list of congregation of the Sarang Jeil Church at the center of the recent spike in coronavirus outbreaks. So far 796 cases have been confirmed to be tied to the church.

Police and health officials on Friday night raided the church following a failed attempt to secure a full list of its members. Pastor Jun Kwang-hoon of the church took part in the rally, leading church members and his political followers from around the country.

It is not known exactly how many of the church congregants participated in the event. Jun and several of his aides tested positive after the rally.

The city has banned gatherings with more than 10 people until Aug. 30 to stem the spread of the virus. With the measure, 1,654 gatherings were canceled, while 52 will proceed as scheduled, the city said. 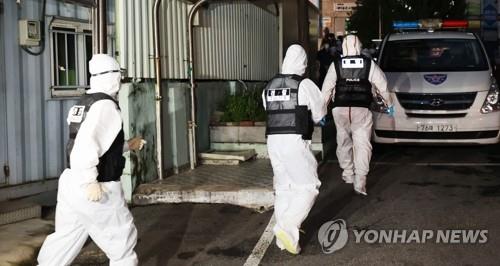