SEOUL, Aug. 23 (Yonhap) -- It was the kind of pitching performance that South Korean baseball fans are already familiar with, and one that fans of his new Major League Baseball (MLB) team are hoping to see more often down the road.

Kim Kwang-hyun of the St. Louis Cardinals fired six shutout innings against the Cincinnati Reds to earn his first big league victory in St. Louis on Saturday (local time). He gave up just three hits and struck out three, while not giving out any free passes. 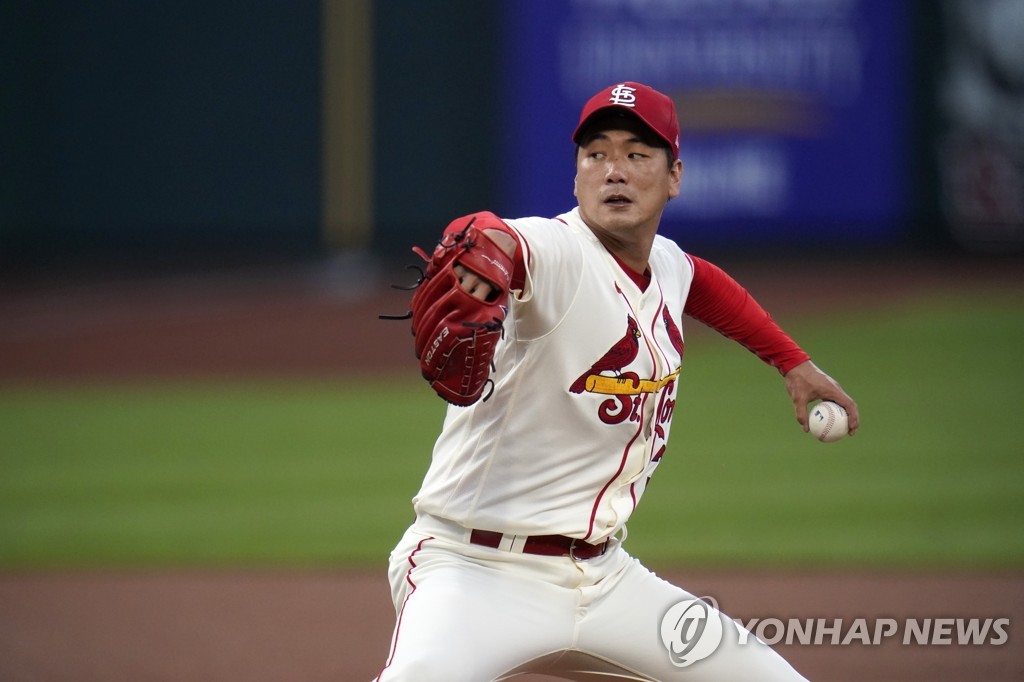 The Cardinals led 3-0 when the bullpen took over from Kim to start the seventh, and they held on to win by the same score.

"I've dreamed of standing on a big league mound since I was a boy," Kim said in his post-game Zoom session with reporters. "It feels great to get this victory as a starting pitcher."

Kim was an MVP-winning starter for 13 years in the Korea Baseball Organization (KBO) before signing a two-year, US$8 million contract with the Cardinals last December. The 32-year-old left-hander left home on a high note, going 17-6 with a 2.51 ERA in 2019, ranking in the top three in both wins and ERA. 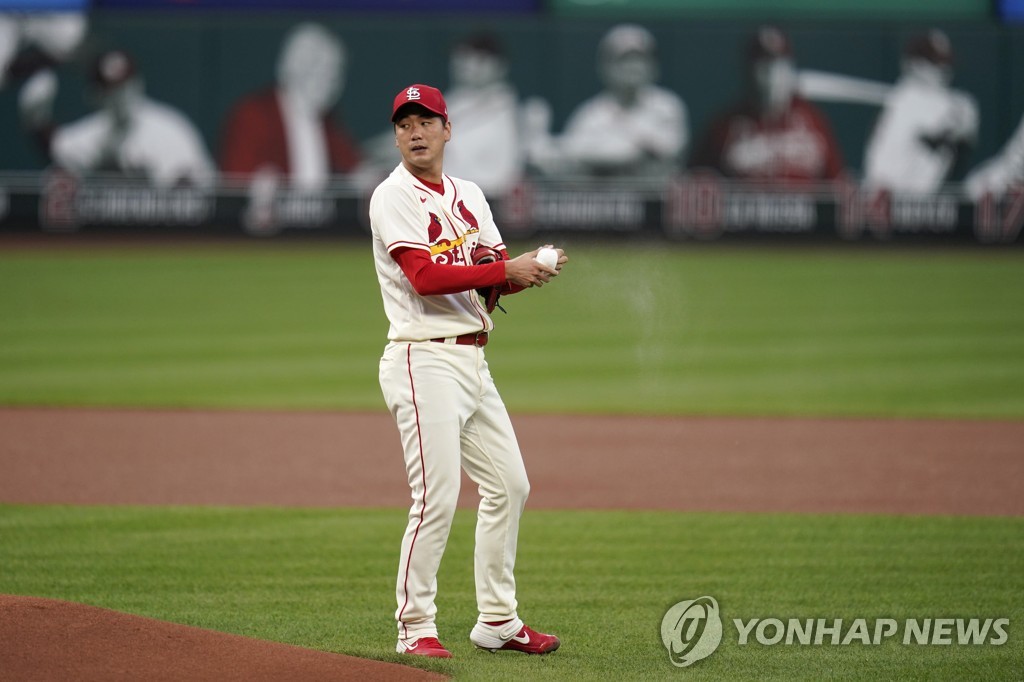 Kim has come a long way to notch his first big league win.

After the 2014 season, Kim was posted by his KBO club, SK Wyverns, as he took his first crack at making the jump to the majors. In a silent auction that ensued, the San Diego Padres won the exclusive negotiating rights to Kim with a $2 million bid. But the two sides couldn't come to an agreement, forcing Kim to return to the KBO. He would pitch there for five more years, though he missed the entire 2017 season following an elbow surgery.

He finally signed his first big league contract with the Cardinals last December and entered his first spring training with an eye on winning a starting job. Kim was one of the Cardinals' best pitchers in spring, with eight shutout innings and 11 strikeouts across four outings, including two starts.

But then the COVID-19 pandemic forced MLB to press pause on spring training. He stayed at the team's spring training home, Jupiter, Florida, for a while before settling in St. Louis, where he tried to remain sharp by playing catch with veteran right-hander Adam Wainwright.

Once teams returned to summer camp, Kim was unexpectedly named the Cardinals' closer, despite having virtually zero relief experience in South Korea.

Kim was thrown right into fire, as he was summoned for a save opportunity on Opening Day against the Pittsburgh Pirates. He gave up two runs -- one unearned -- to collect a nervy save in a 5-4 victory.

But the Cardinals only played four more games before a COVID-19 outbreak within the team halted their season. They were idle from July 31 to Aug. 14.

With injuries to multiple starters, Kim was thrust into the rotation before the Cardinals resumed playing.

And in just his second MLB start on Saturday, Kim found the kind of groove that had made him such a high-end starter in his native country.

Kim faced 21 batters and threw a first-pitch strike on 12 of them. Consistently staying ahead on batters also helped Kim work more efficiently than the last outing against the Chicago Cubs on Monday.

Kim was pulled after throwing 57 pitches in 3 2/3 innings then. He also issued three walks. Before facing the Reds, Kim said he would try to be more efficient and pitch as deep into the game as possible.

He lived up to his words. He went to a three-ball count just three times all game, and there was hardly any moment when Kim appeared to be laboring. All told, Kim got through his six innings on 83 pitches, 55 of them for strikes. 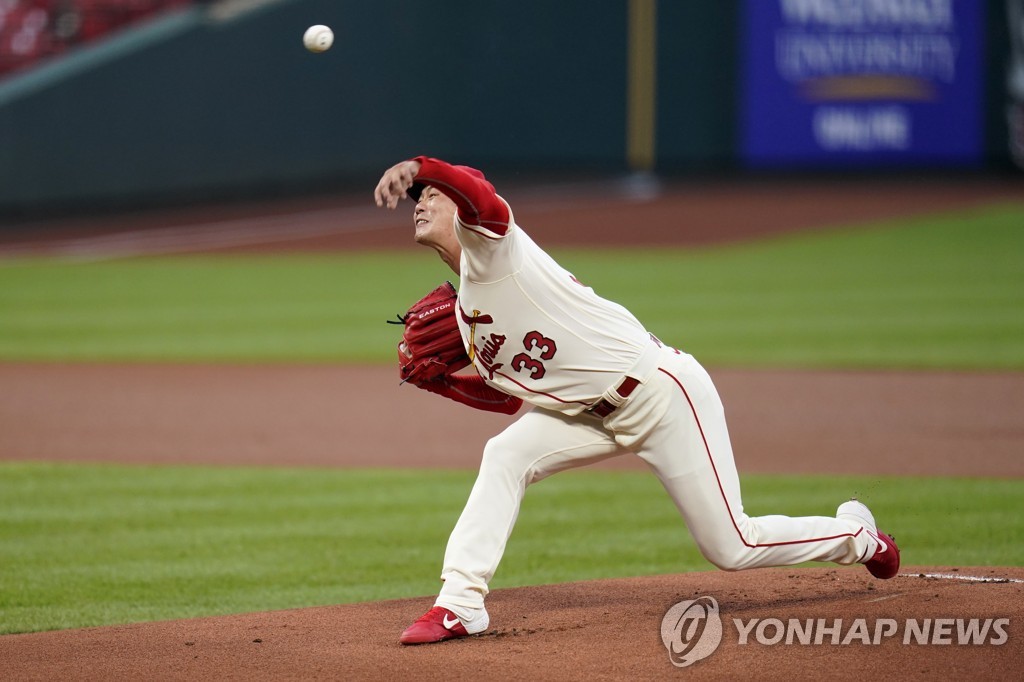 Kim also received help from his defense on some hard-hit balls. In the fifth, with a runner at second base, third baseman Matt Carpenter snared a hard line drive off the bat of Curt Casali. Then in the sixth, right fielder Dylan Carlson got the final out with a diving grab on a sinking liner from No. 3 hitter Matt Davidson. The play stranded Kyle Farmer at first base, and if Carlson had missed the ball, a run would have scored with the meat of the order coming up.

Kim, who had mostly been a fastball-slider pitcher in the KBO, expanded his repertoire for the second straight start. He threw 38 fastballs, 26 sliders, 11 curveballs and eight changeups. All three of his strikeouts came on sliders.

His pitch count was up to 74 through five innings. Reliever John Gant was warming up in the bullpen, making his appearance to start the sixth inning a likely scenario. Instead, Kim gave the Cardinals another inning and pitched around an infield single by Kyle Farmer to get through the sixth on just nine pitches.

The top four hitters in the Reds' starting lineup, including former MVP Joey Votto at the leadoff spot, didn't manage a hit against Kim.

Kim said he was most pleased with not giving up any walks in this game, though he wants to avoid getting into a full count. He went 3-2 three times, including twice against Votto, the Canadian god of walks who has led the National League in that category five times and in on-base percentage seven times. Kim retired Votto on both occasions, including a strikeout in the third.

"I need to start throwing harder if I want to become more aggressive," said Kim, whose four-seam fastball topped out at 92.6 miles per hour and sat around 90. "I've had to halt training this season (due to the COVID-19 situation), and so I haven't been able to throw as hard as I want. But I think it will get better."

To make up for a lack of fastball velocity, Kim said he tried to change speeds with his sliders and curveballs.

"Against left-handed hitters, I tried to throw sliders at different speeds, and against right-handed batters, I tried to attack both sides of the plate with my slider," he said. "I tried my best to keep them off balance."

Kim also reserved a special message for fans back home in South Korea, as the country is struggling to contain the recent spike in COVID-19 cases.

"Even though I am far away, I'd like to think I can cheer up people back home with good performances," Kim said. "I grew up watching Park Chan-ho (South Korea's first major leaguer) and remember how he inspired Korean people during the financial crisis (in the late 1990s). I hope I can do the same." 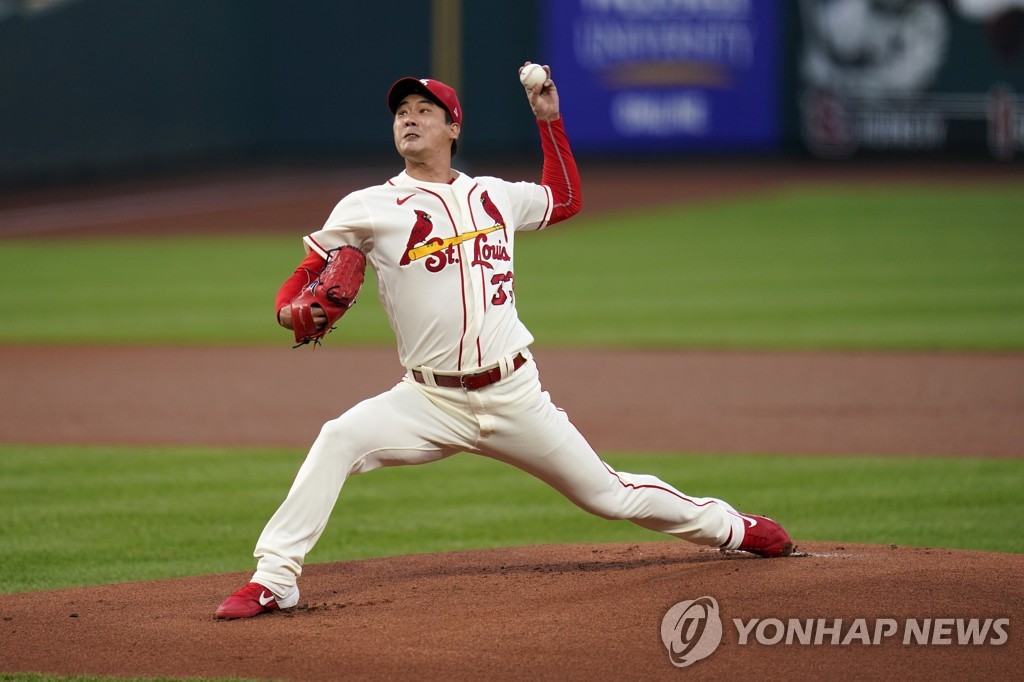