SEOUL, Aug. 24 (Yonhap) -- South Korean TV studios and broadcasters halted productions of dramas and shows for about a week Monday amid the nationwide struggle to deal with a resurgence in novel coronavirus infections.

"For the safety of cast and staff members of our productions, we will stop shooting of all shows from Aug. 24-31," it said in a statement Saturday. "Several dramas will be affected by the suspension."

It said the thrillers "The Flower of Evil" of tvN and "Missing: The Other Side" of OCN are subject to the temporary stoppage.

Starring Lee Joon-gi, the 16-episode "The Flower of Evil" is set to air its ninth episode Wednesday, while the 10-episode "Missing" will premiere this Saturday. 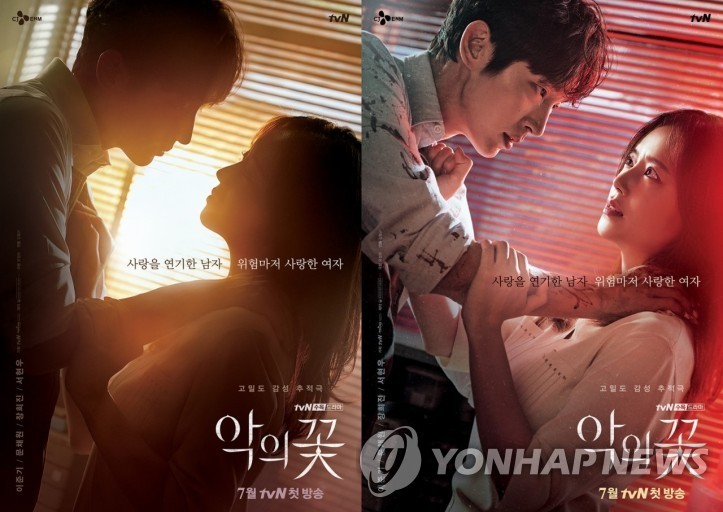 But the second season of the crime opera "Stranger," which has been airing since Aug. 15, and the upcoming romance "Record of Youth," set to premiere Sept. 7 will be broadcast as scheduled as they have completed filming already, Studio Dragon added.

CJ ENM, meanwhile, said some of its productions like the reality show "Hometown Flex" and the live music show "M Countdown" will also have a one-week break starting this week.

Earlier, KBS decided to suspend drama productions for a week as part of its efforts to prevent further COVID-19 infections.

Five TV dramas, including the upcoming romantic comedy "Do Do Sol Sol La La Sol" to be first aired this Wednesday, will be put on hold.

In line with the precautionary measures, KBS' long-running reality show "Two Days One Night," which airs every Sunday, canceled this week's shooting schedule on Jeju Island.

KBS said the production halt can be extended if the COVID-19 pandemic continues.
SBS was not an exception, suspending shooting of popular weekend variety shows "Running Man" and "Master in the House" this week, while the romance reality show "Flaming Youth" rescheduled its filming last week.

KBS canceled the media session for "Do Do Sol Sol La La Sol," originally set for Wednesday, while tvN and OCN called off press events for "Record of Youth" on Friday and "Missing: The Other Side" on Wednesday, respectively.

The press conference was considered the last public appearance of star actor Park Bo-gum, who chose "Record of Youth" as his final project before starting his mandatory military duty in the Navy later this month.

Global media giant Netflix has also joined the move, suspending productions of its Korean original content like "Round Six" and "All of Us Are Dead."

It said it made the decision to comply with the South Korean government's social distancing guidelines and secure the safety of its film crew.

The industrywide move came as the recent spike in coronavirus cases in South Korea has swept the entertainment circle. The country has reported around 300 confirmed cases per day for about a week, most of which were from cluster infections linked to churches.

The filming of the fantasy romantic comedy "To All The Guys Who Loved Me" on KBS has been halted since an extra was confirmed to have contracted the virus last week.

And two actors, Kim Won-hae and Heo Dong-won, starring in the same theatrical play with the infected background actor, have tested positive for COVID-19.

As a result, several actors and actresses who have directly or indirectly come in contact with the patients have been tested or are under self-quarantine, affecting productions of TV series and shows.