SEOUL, Aug. 24 (Yonhap) -- A participant in a labor rally in downtown Seoul on Aug. 15 was confirmed to be infected with the new coronavirus, its organizer said Monday.

But it is unclear whether the patient, an employee at Kia Motors Corp., contracted the disease during the event, the Korean Confederation of Trade Unions (KCTU) said.

The person underwent a test at a hospital in Pyeongtaek, some 70 kilometers south of Seoul, on Friday.

The patient was among about 2,000 members who attended a KCTU-organized rally in Jongno, central Seoul, on the Aug. 15 Liberation Day.

More than 70 cases linked to separate demonstrations held by conservatives in nearby Gwanghwamun on the day have been confirmed, according to health authorities. 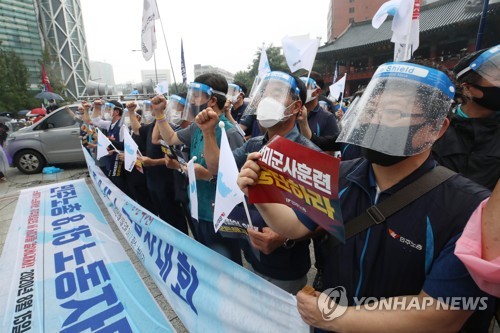 The KCTU went ahead with the protest over labor rights and Korean peace, despite the city government's prohibition due to concerns about the spread of the coronavirus.

The group said the infection may not be traceable to the assembly, saying a worker at the same plant with the patient was diagnosed with COVID-19 a week before the rally was held.

The group emphasized it took precautionary measures to minimize infection, including wearing masks and face shields and keeping a safe distance.

It decided Thursday to have all participants tested, after scores of infections linked to other rallies were reported.

The Seoul metropolitan government said Monday it will have all participants in the rallies held in the city center on the day tested for the virus.
(END)