SEOUL, Aug. 24 (Yonhap) -- The unification ministry has scrapped a plan to allow barter transactions with a North Korean trading company after the firm was found to be a subject of international sanctions, lawmakers said Monday.

Vice Unification Minister Suh Ho made the report during a closed-door meeting of the National Assembly's Intelligence Committee held earlier in the day, according to the lawmakers who attended the parliamentary session.

The ministry had been weighing whether to approve the 150 million-won (US$126,039) deal, forged in June between a South Korean farmers' group and the North's Kaesong Koryo Insam Trading Co., to bring in North Korean ginseng, blueberry liquors and other food products in return for South Korean sugar.

"The project in question can be seen as having been completely dropped," Rep. Ha Tae-keung of the main opposition United Future Party told reporters. "It seems that the Unification Ministry has not carried out a thorough (background) check on the firm through the National Intelligence Service."

Kaesong Koryo Insam Trading is subject to global sanctions banning economic transactions with the North. It is presumed to be a front for Bureau 39 of the North Korean Workers' Party known to be handling secret slush funds for the Kim family.

Unification Minister Lee In-young has been seeking to bring frayed inter-Korean ties back on track through cooperative projects, including the envisioned barter transaction deal, since he took office last month, saying that such small-scale trade could be a starting point for full-blown cross-border cooperation.

Lee has argued that bartering rice and medicine from the South for mineral water from Mount Kumgang and Mount Paekdu in the North can also avoid violating sanctions as it does not involve sending "bulk cash" to the North.

Later in the day, the unification ministry denied that it has scrapped the deal, adding that it is still in discussion with the South Korean farmers' group to keep the project alive.

"Kaesong Koryo Insam Trading is just one of multiple North Korean counterpart companies in the deal," the ministry said in a text message sent to reporters.

"In consideration of concerns about the firm, we are in discussion with the (farmers') group ... about possible adjustments to the terms of the contract," the ministry added.

The ministry did not elaborate but the adjustments might be intended to exclude the North Korean firm subject to sanctions from the envisioned barter transactions.

Rep. Kim Byung-kee of the Democratic Party, also a key member of the Intelligence Committee, told Yonhap News Agency over the phone that "this does not mean all of the ministry's envisioned barter transaction projects (with North Korea) have been thwarted." 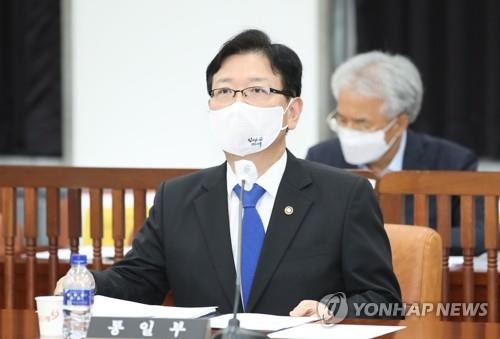