Apple Korea has been under probe by the Korea Fair Trade Commission (KFTC) over allegations that it had required the country's three mobile operators -- SK Telecom Co., KT Corp. and LG Uplus Corp. -- to pay the cost of television advertisements and warranty service for its iPhones.

The KFTC has said Apple Korea holds a clear advantage over local mobile carriers and that handing over the cost of advertisements is only another means to squeeze their profits.

Under the programs, Apple Korea promised to spend 40 billion won to build a research and development center for local small and medium-sized firms in the smartphone manufacturing sector.

Another 25 billion won will be spent to give consumers 10 percent discounts on repairs and a smartphone insurance service, the KFTC said.

Apple Korea will spend another 25 billion won to set up an education center to train professionals in the sector of information, communication and technology, the KFTC said. 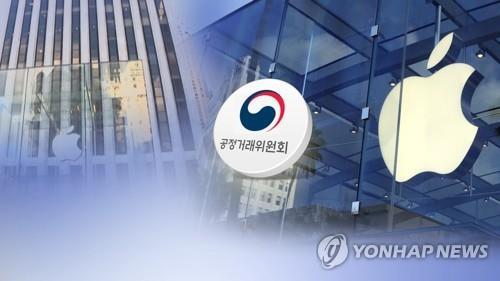 Apple Korea will give mobile carriers more say in sharing their advertising costs and approving their ads, the KFTC said.

Song Sang-min, director general handing the issue at the KFTC, said such measures are expected to help reduce the advertising burden on mobile carriers.
Apple Korea had unilaterally ordered mobile carriers to set ad costs, but the measure will help Apple Korea and mobile carriers discuss how to share such costs, Song said.

The KFTC said relevant parties will discuss whether to accept Apple Korea's proposal by Oct. 3.

If relevant parties decide to accept the measures by Apple Korea, the KFTC will finally endorse them.

South Korean law allows a company accused of anti-competitive practices to state a correction scheme without deliberating whether those practices violate the country's competition law.

In a statement, Apple pledged to step up cooperation with its business partners and consumers in South Korea.

"We are looking forward to deepening our relationships in Korea by enhancing support for education, small businesses and facilitating future generations with new skill sets," the statement said.