SEOUL, Aug. 24 (Yonhap) -- A total of 17 churches in Seoul were caught for holding in-person worship services on Sunday in violation of quarantine authorities' order issued earlier to contain the spread of the coronavirus outbreak, the metropolitan government said Monday.

The Seoul government conducted on-site inspections at 3,894 churches across the capital on Sunday to verify whether they were complying with the gathering ban under the current Level 2 of the three-tier social distancing system. 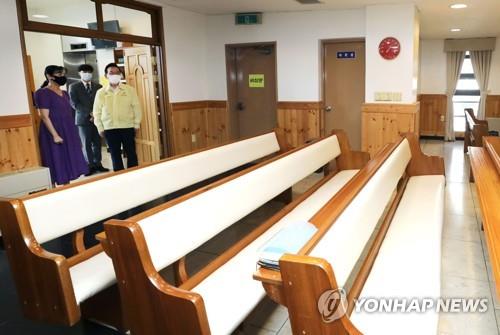 In the inspections, 17 churches were detected holding on-site services attended by more than 20 people in disregard of the authorities' gathering ban, it noted.

The inspected churches accounted for 56 percent of the entire 6,989 churches in Seoul.

The ban on face-to-face church services is one of the Level 2 quarantine restrictions imposed by the Seoul government last Wednesday, along with the closure of many high-risk private businesses.

According to the municipal government, 1,121, or 28.8 percent, of the inspected churches suspended Sunday services, while 2,542 churches, or 65.3 percent, shifted to online services.

The Seoul government said it plans to take punitive administrative measures against the 17 churches after carrying out further investigation into their violation of the ban on face-to-face worship services.

Prior to last Wednesday, churches in the capital were only barred from holding events or gatherings, except for the Sunday services. But the regulations have been toughened, as infections coming from churches in the greater Seoul area have been at the center of the recent surge in cases.