SEOUL, Aug. 25 (Yonhap) -- Samsung Electronics Co.'s market share in the global foundry industry is expected to decrease in the current quarter from the previous three months, a report showed Tuesday.

Samsung's share of the foundry business was estimated at 17.4 percent in the third quarter, down 1.4 percentage points from three months earlier, according to a report from industry tracker TrendForce.

The South Korean tech giant's revenue from the foundry business was expected to jump 4 percent on-year to US$3.66 billion in the third quarter of the year, TrendForce said, but its growth would be less than the industry average. 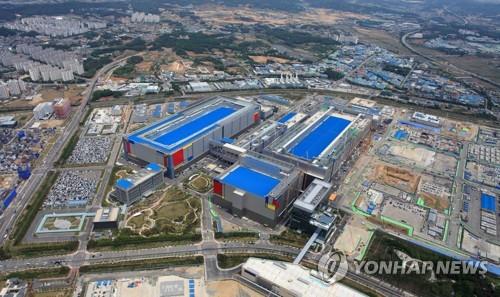 "Samsung has adjusted the wafer input levels for its in-house Exynos APs due to declining sales of its flagship S20 series smartphones," TrendForce said. "However, wafer input orders from Samsung's foundry clients in fear of chip shortages managed to galvanize growth in Samsung's foundry businesses despite the shortfall in Exynos wafer inputs."

GlobalFoundries was expected to take the No. 3 spot in the global foundry market with a 7 percent share with its revenue falling 3 percent on-year to $1.48 billion in the third quarter.

South Korea's DB HiTek Co. was estimated to rank 10th with a 0.9 percent market share, TrendForce said. Its revenue was projected to increase 2 percent on-year to $191 million in the third quarter.

Overall, TrendForce expected the combined revenues of the top 10 foundries in the third quarter to increase 14 percent from a year earlier as downstream clients are showing strong chip demand to prepare for year-end shopping festivities.