SEOUL, Aug. 25 (Yonhap) -- The number of daily new coronavirus cases in South Korea stayed below 300 for the second consecutive day Tuesday, but health authorities warned that the country is on the brink of a nationwide pandemic due to continuing church-linked virus transmissions and a growing number of patients with unknown infection routes.

The country reported 280 new COVID-19 cases, including 264 local infections, raising the total caseload to 17,945, according to the Korea Centers for Disease Control and Prevention (KCDC).

"The number has decreased compared to the weekend, but we cannot conclude whether the decline was attributable to the enhanced social-distancing measures," Yoon Tae-ho, a senior health official, said in a daily briefing.

The country reported 103 new cases on Aug. 14, which nearly doubled from the previous day. Since then, the country's daily virus cases have been in triple digits, as sporadic clusters have emerged, mostly traced to a church in northern Seoul and an anti-government march on Liberation Day on Aug. 15.

Over the past 12 days, a whopping 3,175 new cases across the nation were identified.

"We are facing the calm before the storm," Kwon Joon-wook, deputy director at the KCDC, said. "If we fail to curb the spread of the virus now, we may face a situation that our medical system cannot manage. This will hinder treatment of non-coronavirus patients and lead to more deaths." 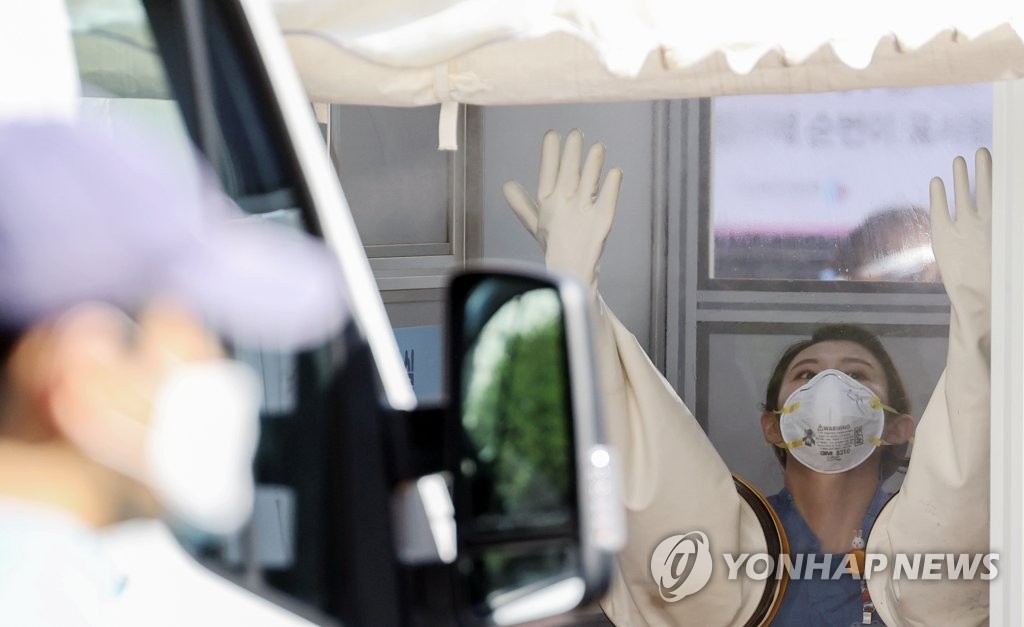 Of the locally transmitted cases, Seoul accounted for 134, and the surrounding Gyeonggi Province added 63 cases. The greater Seoul area is home to half of the country's 51 million people.

The Sarang Jeil Church in northern Seoul, a hotbed of the recent spike in new infections, has reported a total of 915 COVID-19 cases as of Tuesday noon, up 40 from the previous day.

Of the number, 564 were church members, and others caught the virus through several stages of infections.

A total of 193 patients were reported from the Aug. 15 demonstration in central Seoul as well, up 15 from a day earlier. A large number of Sarang Jeil Church members, including its pastor who was also infected with the virus, took part in the rally.
More infections were reported throughout the country as well.

A Starbucks cafe in Paju, north of Seoul, has reported 66 patients as of Tuesday, up two from Monday.
Another door-to-door sales business based in Gwanak Ward of Seoul reported 44 patients, up 19 from the previous day.

Over the past two weeks, roughly 18.5 percent of the newly identified patients had unknown infection routes. This marks a drastic increase from the 8.3 percent posted in the two-week period earlier.
Patients aged 60 and above accounted for 32 percent over the two-week period, rising sharply from the previous 24 percent. 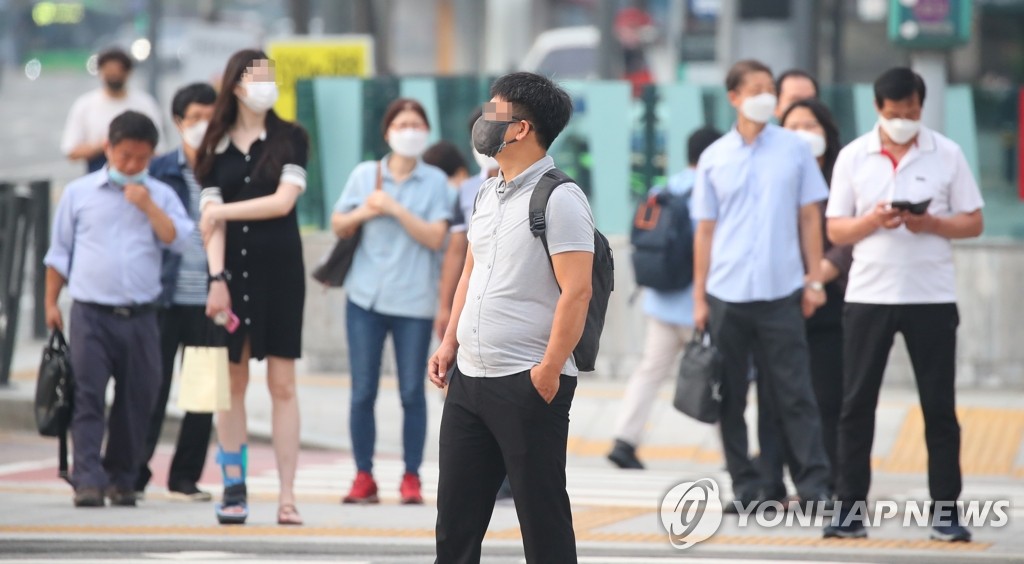 Health authorities have warned that the country may have to adopt the highest level of social distancing if the number of new infections does not slow down this week.

The country already decided to impose the Level 2 social distancing scheme in all regions, effective Sunday. It was initially in effect only in the greater Seoul area.

Major cities have already decided to not allow any rallies with 10 or more participants. The capital city of Seoul made it mandatory for people to wear protective masks at all times in public, except when they are eating or drinking.

The capital city also decided to ban the use of public transportation for those not wearing masks. Taxis have been ordered to refuse to serve those without masks as well.

The highest anti-virus curbs can be issued when the number of daily virus cases reaches a two-week average of 100-200 and the doubling of new COVID-19 infections occurs more than twice a week. 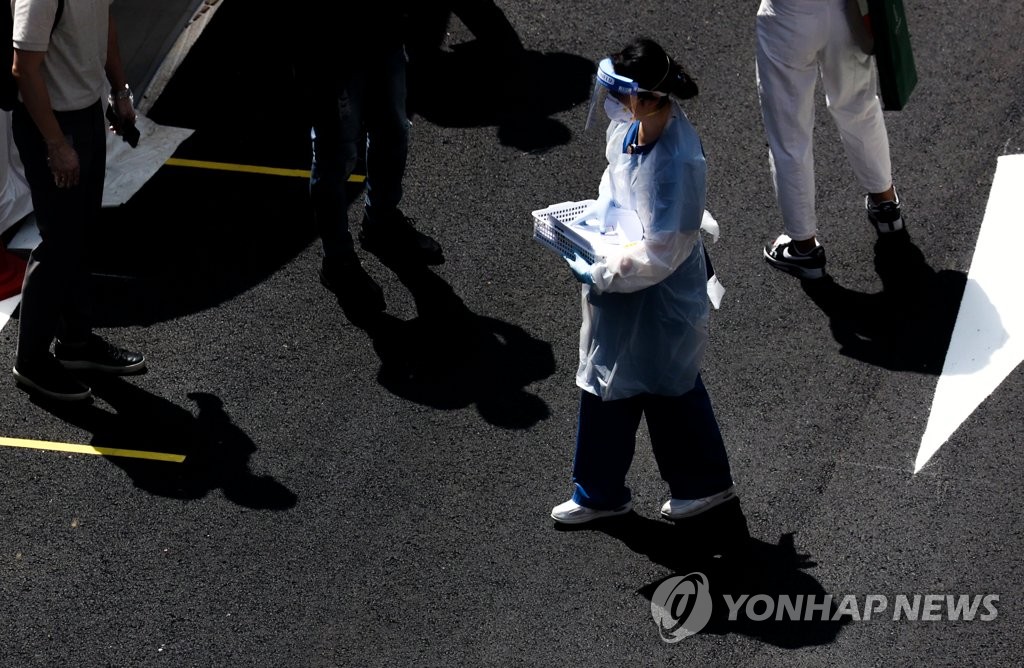 Tighter measures, however, could lead to further economic fallout.
South Korea plans to monitor the situation throughout this week before deciding whether to raise social distancing restrictions to the highest level. Health authorities said they are still working on details to prepare for the possible implementation.

Starting Wednesday, all schools in the Seoul metropolitan area will have online classes through Sept. 11.

Some 2,100 schools in the country were already closed Tuesday.

Health authorities are also being vigilant over the upcoming Chuseok holiday in late September and early October, when millions of South Koreans usually travel across the nation to visit relatives.

"We are reviewing various measures to guarantee that people can travel safely. At the current stage, however, we are not considering implementing movement restrictions," Yoon added.

The number of imported cases came to just 16. Seven of them were from the United States, and there were also patients from Bangladesh, Kazakhstan, and Switzerland.

Health authorities said more than 97 percent of the victims had underlying diseases, such as high blood pressure and diabetes.

Those in their 80s accounted for nearly half of the total deaths, followed by people in their 70s and 60s with 30 percent and 13.2 percent, respectively.

More than half of the victims were infected at social welfare facilities and hospitals.

The total number of people released from quarantine after making full recoveries stood at 14,286, up 67 from the previous day. This indicates 79.61 percent of the patients reported here were cured.

South Korea has carried out 1,825,837 COVID-19 tests since Jan. 3. Health authorities said the country currently has at least 570,000 test kits, and they plan to continue monitoring the situation to keep up the supply.