In a written interview with Yonhap News Agency, Shin Hee-yong, a medical professor long involved in efforts to expand cross-border exchanges, also stressed the need for joint medical research with the North in the face of growing risks from such a global pandemic as the coronavirus.

It was his first interview since taking office as chairman of the South Korean Red Cross last week.

"Korea Red Cross will actively explore ways to provide assistance (to the North), if necessary, in cooperation with the International Federation of Red Cross and Red Crescent Societies," Shin said.

"In particular, if North Korea asks for assistance to be given to address the damage caused by heavy rains, either through bilateral or multilateral channels, we will respect it and join in relevant efforts." 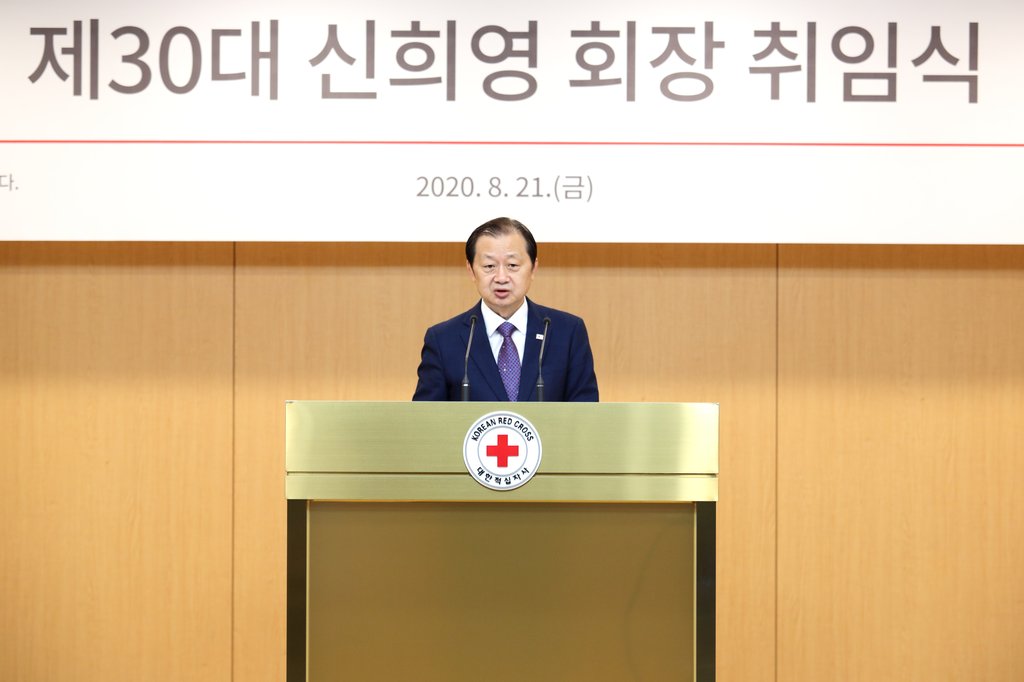 North Korea has claimed to be coronavirus-free but it has been relatively swift in enforcing antivirus measures by closing its border earlier this year and toughening quarantine criteria.

Those antivirus efforts, however, have reportedly been taking a toll on its already fragile economy by hampering its imports of food and other necessary materials.

Things appear to have gotten worse as the country was hit hard by recent heavy downpours, which reportedly wrought havoc on its rice-producing areas.

Calls are growing for outside assistance to be provided to help the North better handle antivirus efforts and its possibly worsening food shortages. South Korea has also voiced a willingness to provide aid to the North.

North Korean leader Kim Jong-un, however, recently rejected any offer of outside help, saying that accepting foreign aid could increase the risk of coronavirus infections.

Shin admitted that it has become more difficult than ever to seek such cooperation with the North due to the North's border closures and strict quarantine measures along with global sanctions.

He, however, emphasized that the global pandemic has also highlighted the urgency for international and regional cooperation, adding that it is necessary for the two Koreas to push for joint research efforts in the public health sector going forward.

"It is necessary to prepare for joint research and development between the two Koreas in the public health sector in a step-by-step manner," he said.

Shin noted that South and North Korea are living in the same "community of life" that should seek "coexistence" in many areas. He promised that the South's Red Cross will play a "leading role" in laying the foundation for securing coexistence between the two Koreas on the Korean Peninsula.

"The Red Cross will play a leading role in laying the framework for health security at home and abroad through cooperation with the government, civic and international communities, while trying to draw up comprehensive action plans that will meet the needs of North Korea."

Asked what is his top priority in inter-Korean affairs, he said that holding reunions of families separated by the 1950-53 Korean War is one of the most urgent matters, saying that he will actively pursue to hold Red Cross talks with the North to allow those people to meet their long-lost loved ones before they die.

The two Koreas held their last reunions of war-separated families in August 2018 at the Mount Kumgang resort on the North's east coast after inter-Korean Red Cross talks.

In a subsequent move, South Korea sought to hold video reunions and secured relevant sanctions exemption on equipment be sent to the North last year but no more progress has since been made amid strained inter-Korean relations.

"Efforts should be made to allow those 51,000 surviving senior people to hear from their families in the North as soon as possible," he said. "If conditions are met, we hope to hold Red Cross talks (with the North) and discuss this matter before than anything else."