SEOUL, Aug. 25 (Yonhap) -- HDC Hyundai Development Co. and the main creditor of Asiana Airlines Inc. will meet to push for a breakthrough in the stalled deal over the carrier, financial sources said Tuesday.

HDC Chairman Chung Mong-gyu and Lee Dong-gull, chairman of the state-run Korea Development Bank (KDB), are expected to meet Wednesday to discuss ways to revive the deal that HDC signed last year to acquire the carrier, according to corporate insiders.

Chung and Lee have met twice before but failed to narrow the gap over the acquisition terms. 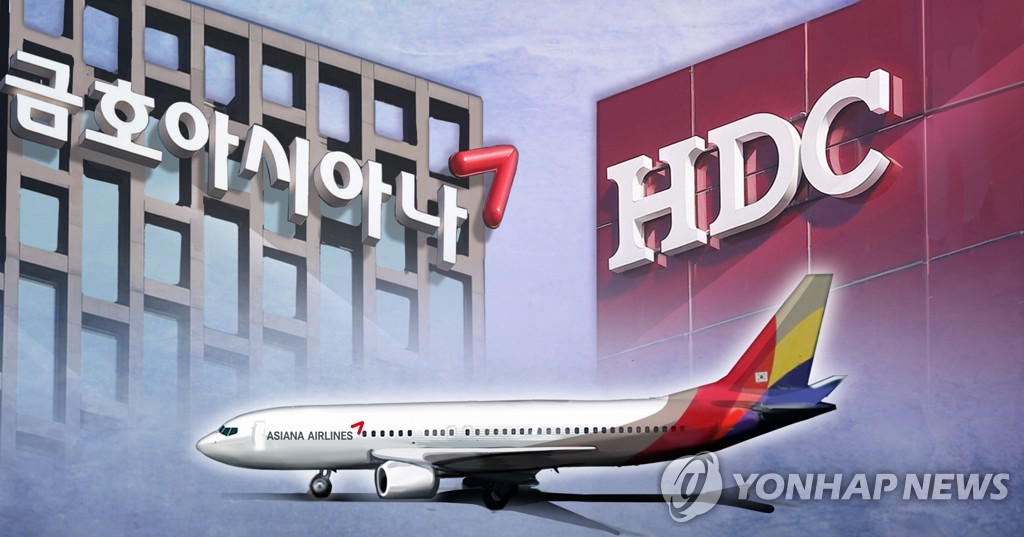 In December, the HDC-led consortium signed the deal to acquire a 30.77 percent stake in Asiana Airlines from Kumho Industrial Co., a construction unit of Kumho Asiana Group, as well as new Asiana shares to be issued and the carrier's six affiliates, for 2.5 trillion won (US$2.2 billion).

The consortium was originally planning to complete the acquisition by June 27. But the new coronavirus outbreak emerged as a major stumbling block early this year.

HDC and Kumho Industrial recently agreed on a top-level meeting to push forward the deal following months of disputes over acquisition terms that HDC argues have changed dramatically due to the pandemic that has impacted the airline industry.

But the two sides ran into difficulties over the purpose and logistics of the meeting.

HDC wanted a second round of due diligence on Asiana Airlines to figure out the carrier's current financial status amid the pandemic. But Kumho Industrial wanted the meeting to be focused on wrapping up the deal.

Concerns over the possible rupture of the deal grew in June when HDC called for renegotiations with Kumho and Asiana creditors over the acquisition terms, describing the virus crisis as an "unexpected and very negative factor" that will affect its planned acquisition.

HDC demanded renegotiations through written documents, but the KDB asked the company to hold face-to-face talks.

At the time, HDC cited snowballing debts of the airline as another reason for renegotiations.

HDC also asked for another round of due diligence for 12 weeks from mid-August on the carrier, which was balked at by Kumho and the KDB.

From January to June, its net losses deepened to 432.88 billion won from 267.4 billion won in the same period of last year.

To help Asiana stay afloat, the KDB and the Export-Import Bank of Korea plan to inject a combined 1.7 trillion won into Asiana.

Last year, the two state lenders extended a total of 1.6 trillion won to the carrier.