The enlarged politburo meeting of the Workers' Party held Tuesday appears to be aimed at solidifying internal unity and showing Kim's care for people's lives as the country is facing a growing strain from global sanctions and back-to-back natural disasters weighing on its already fragile economy, experts said.

Kim said the efforts to "thoroughly prevent the casualties by typhoon and minimize the damage to the crops is an important work which can never be neglected even a moment for our Party" and "also a crucial one deciding whether we would successfully wrap up this year's farming or not," the Korean Central News Agency said.

He instructed all workers to "awaken to the importance of the work for preventing the damage by typhoon and the method for countering the crisis, and called upon all the fields of the national economy to take instant measures to prevent the damage from the typhoon." 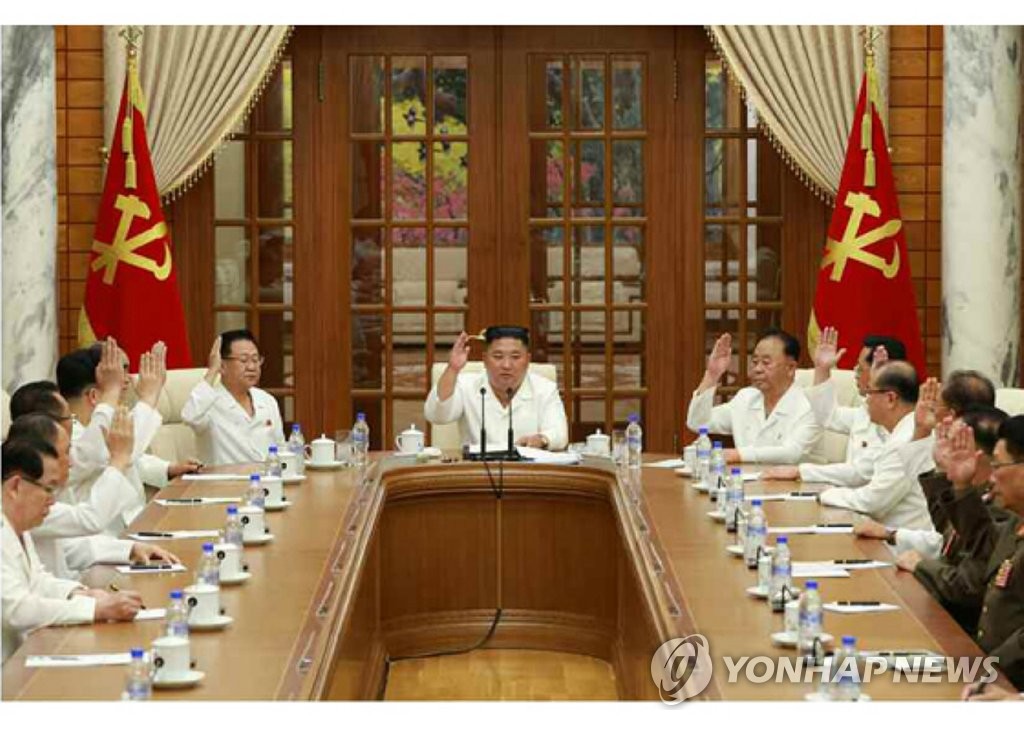 Also discussed were some "defects" and "shortcomings" in the country's ongoing anti-epidemic measures, the KCNA said, though it did not elaborate on what they were.

"The meeting seriously assessed some defects in the state emergency anti-epidemic work for checking the inroads of the malignant virus, and studied measures to overcome the defects urgently," the KCNA said.

"Citing facts about some shortcomings in state emergency anti-epidemic work, the Supreme Leader underlined the need to take active measures involving the entire Party and society for completing and maintaining the anti-epidemic posture and eliminating some defects," it added.

Kim has attended seven such meetings since the start of this year handling such domestic issues, a move seen as aimed at solidifying internal unity and assuaging discontent by demonstrating his strong commitment to stabilizing the lives of his people from the global epidemic and other natural disasters.

"Natural disasters are nothing new for North Korea, but this year's are different since they are happening at a time when Kim called for a frontal breakthrough against challenges confronting his country and emphasized self-reliance in economic development," Lim Eul-chul, a professor at the Institute for Far Eastern Studies at Kyungnam University, said.

"He appears to have no leeway in handing other issues, such as nuclear talks and inter-Korean relations," he said. "He might believe that the best he can do right now is to hold such meetings again and again to strengthen internal unity and muster internal power to minimize damage."

North Korea is staying on high alert against the fast approaching Typhoon Bavi, which is forecast to make landfall on the country's western coast Wednesday or Thursday. It is feared to be more powerful than Typhoon Lingling that devastated large swaths of the country last summer.

State media earlier reported that the North issued a typhoon warning and evacuated ships on its west coast, while closely monitoring key industrial facilities to minimize the possibility of typhoon damage.

The typhoon comes as the country has already been facing multiple challenges, including the fallout from its protracted antivirus campaign and floods caused by recent heavy downpours.

The KCNA said that Kim presided over an Executive Policy Council meeting following the politburo session to discuss "practical issues" related to the plan to hold the January party congress.