SEOUL, Aug. 26 (Yonhap) -- Tens of thousands of doctors launched a full-scale strike nationwide Wednesday despite the government's order to return to work, with some service disruptions reported at major hospitals.

The three-day collective action by doctors, including interns and resident doctors at general hospitals and practitioners at neighborhood clinics, came as they balked at the government's move to increase the number of medical students.

The walkout is the second of its kind and organized by the Korean Medical Association (KMA), which has some 130,000 members.

Earlier in the day, the government ordered striking doctors in the Seoul area to return to work as the country's new coronavirus cases spiked to over 300 again. 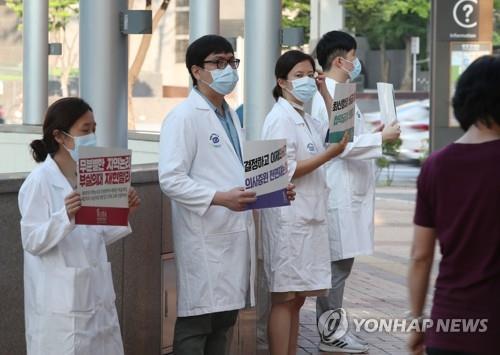 Following the walkout, the health ministry issued a mandatory order to doctors working at hospitals in the greater Seoul area to return to work, citing concerns over spiking coronavirus cases.

"As of 8 a.m., the government has ordered trainee doctors and fellows working at training hospitals in Seoul, Gyeonggi Province and Incheon to immediately return to their medical services," Health Minister Park Neunghoo said.

Those who do not follow the government order without probable cause could have their licenses revoked and even face imprisonment of less than three years or a fine of less than 30 million won (US$25,000).

The health ministry said the medical sector and the government have reached an agreement to put the reform plan on hold until the COVID-19 pandemic is brought under control in the greater capital region.

However, the agreement was rejected by the Korean Intern and Resident Association (KIRA) representing the trainee doctors, the ministry said.

Thousands of trainee doctors have already been staging an indefinite strike since late last week, calling for the government to scrap the plan.

Trainee doctors held a one-day strike on Aug. 7 and also participated in the KMA's nationwide walkout a week later. 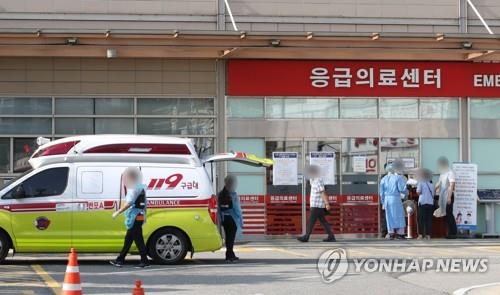 The walkout has already brought disruptions in the health care system at a time when the country is struggling to contain the uptick in new coronavirus cases.

The country reported 320 new COVID-19 cases Wednesday, including 307 local infections, raising the total caseload to 18,265, according to the Korea Centers for Disease Control and Prevention.

A total of 163 out of 200, or 58.3 percent, of medical facilities with trainee doctors went on strike, according to a survey conducted by the health ministry. The ratio for fellow doctors came to 6.1 percent.

The number of surgeries at major general hospitals in the greater Seoul area nearly halved, as the walkout forced doctors to reduce clinic hours and delay procedures.

Seoul National University Hospital said around 60 surgeries were performed, sharply down from a daily average of 120, while more than 110 surgeries at Samsung Medical Center have been postponed.

The general hospitals replaced night hours usually covered by interns and residents with professor-level doctors to prevent any disruption at emergency rooms and rooms for critical patients.

The walkout by practitioners at neighborhood clinics is also expected to disrupt medical service, prompting the government to prepare an emergency system at public health centers across the country.

An unknown number of neighborhood clinics are closed Wednesday. About 33 percent of the practitioners closed their clinics during their first strike earlier this month. 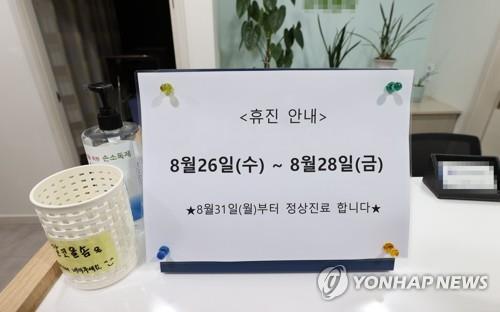 Calling the government's move a "hasty and unilateral" decision, trainee doctors launched the indefinite strike Friday on a staggered basis, and such doctors at all levels are now staging the collective action.

On Tuesday, both sides also agreed to launch working-level consultations. But the talks have yet to generate a major breakthrough, prompting the KMA to press ahead with the full-scale walkout.