The decision was made during a meeting held at the National Assembly between the government and the ruling Democratic Party to draw up the 2021 budget bill.

The New Deal project, announced earlier this year, aims to inject 160 trillion won into the economy by 2025 to help create 1.9 million jobs and reboot the economy battered by COVID-19. It also seeks to lay the groundwork for economic growth in the long term.

Another some 20 trillion won has also been earmarked for a package of assistance measures intended for young people and young job seekers, he said.

The support measures, called "Youth Hope Package Assistance," encompass a range of projects to boost jobs and welfare for young people against the backdrop of a downturn in the number of new jobs in the market.

The ruling party said the 2021 budget bill with such budget items will be submitted to the National Assembly next Thursday for approval.

According to the budget plan, the government will also make the country's high-school education free for all, starting next year, a year earlier than previously arranged.

The government will also put up to 190,000 houses for public rental for young people and newly married couples.

To narrow any regional gaps in the level of internet access, the government will work to install high-speed internet networks at 575 spots and set up around 15,000 public Wi-Fi zones in rural areas with scant infrastructure next year.

Cho said the two sides shared the understanding that internal and external economic uncertainties are on the rise due to the ongoing global economic downturn. Against this backdrop, the government will continue with its expansionary fiscal position in 2021 to reboot the economy and stabilize people's livelihood, he said. 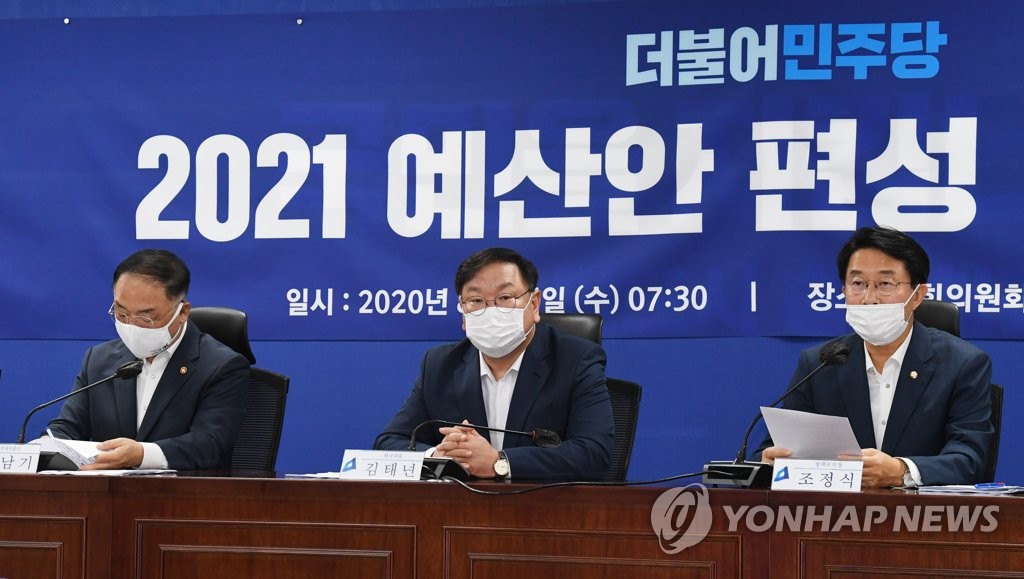