SEOUL, Aug. 26 (Yonhap) -- Clusters of coronavirus infections have been sprouting up throughout Seoul, as the capital again reported a three-digit increase in new cases of COVID-19 on Wednesday.

Seoul added 112 new cases of the coronavirus in a day for a total of 3,232 cases. The number of confirmed cases has increased by three-digit numbers for the past week, due mainly to the outbreak of cluster infections of various size.

The latest clusters were reported from a beauty parlor in the northwestern ward of Eunpyeong and an apartment complex in the southwestern ward of Guro, which have so far infected nine and five, respectively, according to municipal officials. 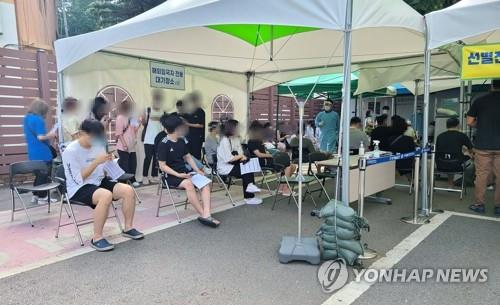 The beauty parlor cluster erupted in Bulgwang-dong of Eunpyeong Ward last Saturday when one of its employees tested positive for the coronavirus. The virus has since been transmitted to her colleagues and family members, totaling eight, the officials said.

Municipal quarantine authorities have asked anybody who visited the Bulgwang-dong beauty parlor from Aug. 8 to Saturday to take a coronavirus test.

At a Guro Ward apartment complex, five residents have tested positive since Sunday. About 400 residents who live in the same building as infected persons have been asked to be tested and 210 have been checked so far.

The number of new infections from other previously known clusters also keeps growing, officials said. In the case of the Sarang Jeil Church at the center of the recent spike in coronavirus cases, 10 more Seoul citizens were found to be infected, raising the total to 544.

The number of infections traced to a door-to-door sales company in the southern ward of Gwanak has also increased to 44, they said, noting the municipal government plans to file a criminal complaint against the company for refusing to submit the list of visitors' names.

Meanwhile, the transmission routes for as many as 40, or 35.7 percent, of Wednesday's new coronavirus patients in Seoul have yet to be clarified, the officials said. The corresponding rate stood at 44.8 percent the previous day.

Clusters of COVID-19 infections cropping up in Seoul

Clusters of COVID-19 infections cropping up in Seoul