SEOUL, Aug. 27 (Yonhap) -- Major hospitals in South Korea are facing disruptions on Thursday as doctors have continued their nationwide strike for the second day in protest of the government's medical reform scheme. 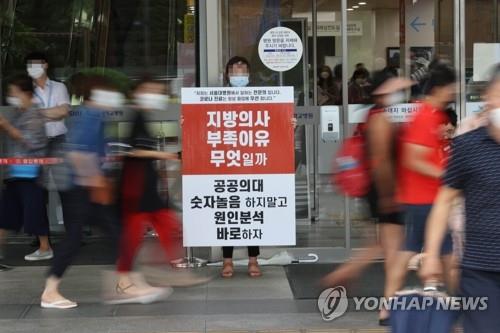 The walkout is the second of its kind and organized by the Korean Medical Association (KMA), which has some 130,000 members. The exact number of doctors taking part in the strike is not known.

"Surgeries are mostly performed on patients in critical or emergency condition," said an official from Seoul Asan Medical Center who asked not to be named. "We will face more serious problems when this situation continues."

Almost all of the 500 trainee doctors out of some 1,800 doctors at Seoul Asan Medical Center have joined the walkout, the official said.

Other medical staff, including nurses, have complained of their overloaded work and schedule, pleading that the government and the medical circle both find a breakthrough.

The health ministry said that of 32,787 clinics in the country, 8.9 percent, or 2,926, were closed as of Thursday noon. The figure is less than the 33 percent participation rate by practitioners tallied in the first walkout earlier this month and down by around 600 from the previous day.

It said that if the number of clinics closed exceeds 10 percent of all medical facilities in a region, it will order doctors to return so as not to affect the right of people to receive treatment.

The KMA on Thursday urged more practitioners to join the collective action, saying that the government is threatening the future of medicine with the unjust order and further charges.

On Thursday, orders were individually sent to 358 striking doctors working at emergency rooms and intensive care units at 20 general hospitals in the greater Seoul area. 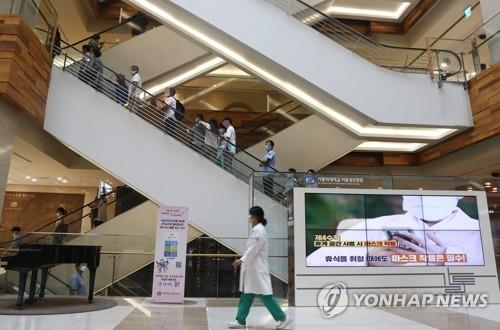 Health authorities said most of the striking junior doctors have turned off their phones in an apparent move to avoid following government orders.

The ministry, however, has refrained from taking actions against striking doctors for the time being.

"At present the government is in the process of listening to what doctors have to say through various channels, so taking legal action has been put on hold," an official source said.

Minister of Health and Welfare Park Neung-hoo met with the heads of several university hospitals earlier in the day to work out differences. Following the meeting that lasted 1 1/2 hours, Park said all sides agreed to find middle ground on key issues.

The Korean Intern and Resident Association (KIRA) representing the trainee doctors and its members will not follow the government's orders to return to work.

Despite the government order, all of trainee doctors working at emergency rooms of Severance Hospital, a major general hospital in central Seoul, even submitted letters of resignation.

Other major hospitals are also expected to report more resignation letters in the day.