Gwangju, a metropolitan city about 330 kilometers south of Seoul, reported 54 new cases of the new coronavirus over the past two days, with the church and table tennis club clusters accounting for the bulk of the infections. 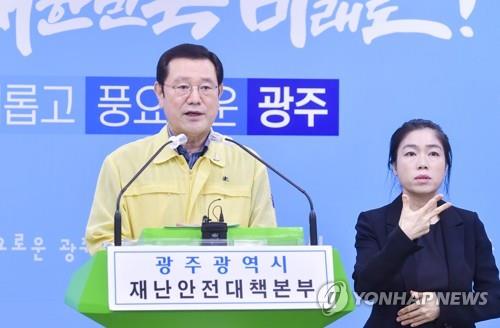 Gwangju Mayor Lee Yong-sup announced the latest administrative order in a news conference, saying his government will take all measures equivalent to those of the Level Three social distancing guidelines, the highest in the nation's three-tier quarantine system, though the current Level Two will continue to be maintained.

All churches and other religious facilities in Gwangju will immediately be subject to the no-assembly order, while group sports activities at all indoor facilities, including those run by universities, will be prohibited, the mayor said, adding the administrative order will remain in effect until noon on Sept. 10.

The city elevated its administrative order for multiuse facilities, such as amusement parks, game rooms, performance halls, senior citizen centers and saunas, from gathering restrictions to gathering bans, he said.

He said his government will consider raising the social distancing guidelines to Level Three if the situation deteriorates further in the coming days.

In the case of cram schools with less than 300 registered students, gatherings of more than 10 people will be banned.

At restaurants and cafes not affected by the gathering ban, owners and employees are all required to always wear face masks during business.

The provincial government has so far applied the gathering ban only to high-risk facilities, such as bars, karaoke rooms, internet cafes and cram schools with more than 300 students.

The province added five new cases of the coronavirus in a day for a total of 117 as of 5 p.m.

According to the Gwangju metropolitan government, 39 citizens were diagnosed with COVID-19 on Wednesday, including 30 members of Seonglim Baptist Church in Buk Ward. On Thursday, the city added 15 new coronavirus cases for a total of 345 as of 8 a.m. 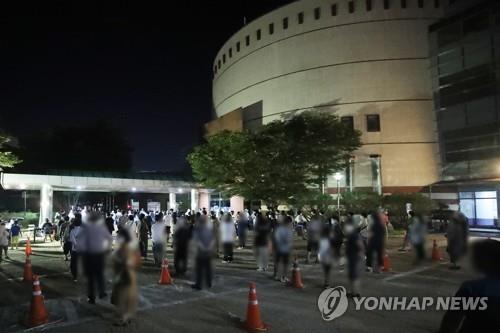 Municipal authorities speculate that the church cluster appears to be traced to a female member in her 60s, who attended the church's worship service three times -- two on Aug. 16 and one on Aug. 19 -- after participating in the Aug. 15 rally of conservatives critical of the Moon Jae-in government in Seoul's Gwanghwamun Square.

The 30 church members infected with the pandemic were found to have attended the same services as the woman, though one of them also took part in the Gwanghwamun rally, officials said.

An intra-city bus driver, who goes to the Gwangju baptist church on Sundays, also tested positive for the virus Wednesday, prompting authorities to suspend the operations of the concerned bus routes and search for about 500 passengers who are believed to have come into contact with the driver earlier this week.

They said 10 out of Thursday's 15 new cases occurred among members of a table tennis club in eastern Gwangju, adding the remaining patients contracted the virus outside the city, including in Incheon, Paju of Gyeonggi Province and Cheonan of South Chungcheong Province. Only one infection came from abroad.