SEOUL, Aug. 27 (Yonhap) -- The number of daily new coronavirus cases in South Korea spiked to a nearly six-month high of over 400 on Thursday as sporadic cluster infections across the country and cases with unknown transmission routes continued to pile up, forcing health authorities to seriously consider implementing the country's toughest antivirus curbs.

The country reported 441 new COVID-19 cases, including 434 local infections, raising the total caseload to 18,706, according to the Korea Centers for Disease Control and Prevention (KCDC).

Thursday's daily tally marks the first time that the country's daily virus cases surpassed the 400 threshold since March 7 when the country reported 483 cases following the massive outbreak in Daegu and its neighboring North Gyeongsang Province tied to followers of the minor religious sect Shincheonji. 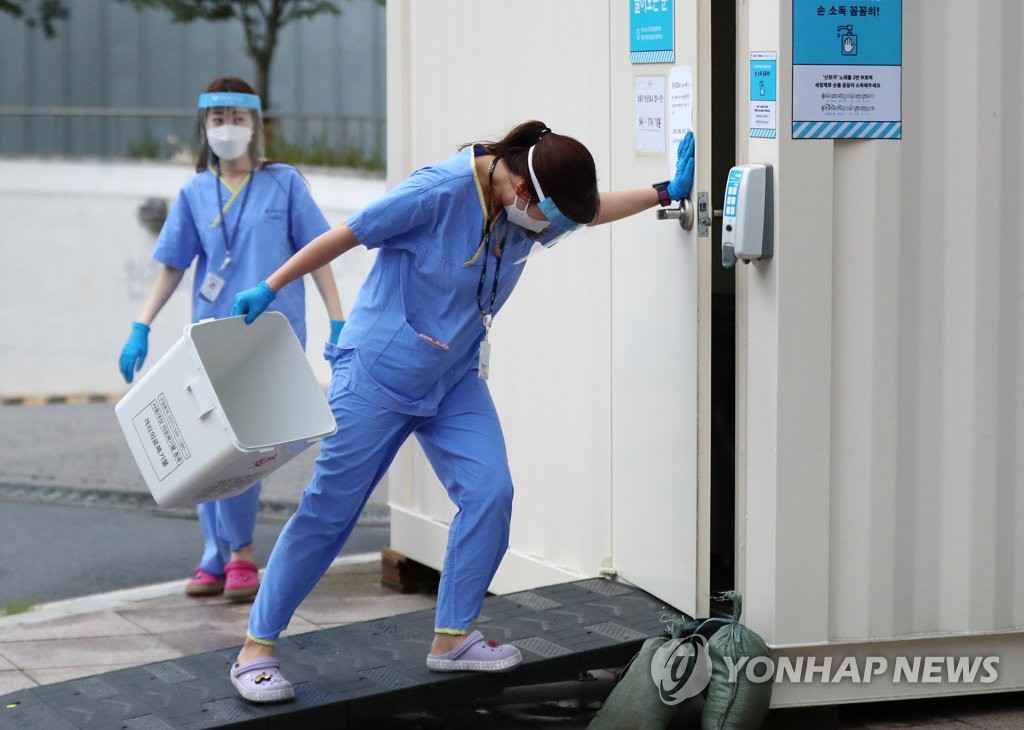 South Korea had been getting the virus under control, when the daily new cases stayed in double-digit figures, until early August.

But the daily virus cases reached 103 on Aug. 14 and have been staying in the triple digits since. Over the past two weeks, more than 3,800 cases have been reported in South Korea, mostly tied to a conservative church in northern Seoul and the Aug. 15 Liberation Day rally.

Of the 434 locally transmitted cases, 313 were identified in the capital area, home to half of the country's 51 million population, which is the first time that the number of cases there surpassed the 300 threshold. Seoul added 154 more cases, its largest daily virus tally, while the surrounding Gyeonggi Province and west port city of Incheon reported 100 and 59 cases, respectively.

Sarang Jeil Church in northern Seoul, a hotbed of the recent spike in new infections, has so far reported 959 COVID-19 cases. The church-linked cases also led to infections in at least 23 locations, with 66 cases reported in nine different provinces and municipalities outside the greater Seoul area.

At least 273 patients have been reported from the Aug. 15 demonstration in central Seoul, with 112 cases being identified in 10 different provinces and municipalities outside the greater Seoul area.

Health authorities said only 32 percent of the 5,912 people traced to the Sarang Jeil Church have so far received virus tests. Of the 51,242 people connected to the Liberation Day rally, only 16 percent of them have taken virus tests, they added.

The number of cases traced to a door-to-door business establishment in Seoul jumped to 56, while an apartment building in Guro Ward, western Seoul, reported 28 cases.

Outside Seoul, a Baptist church in Gwangju reported 31 cases. The number of cases linked to an indoor sports facility in Wonju, Gangwon Province, rose to 64. 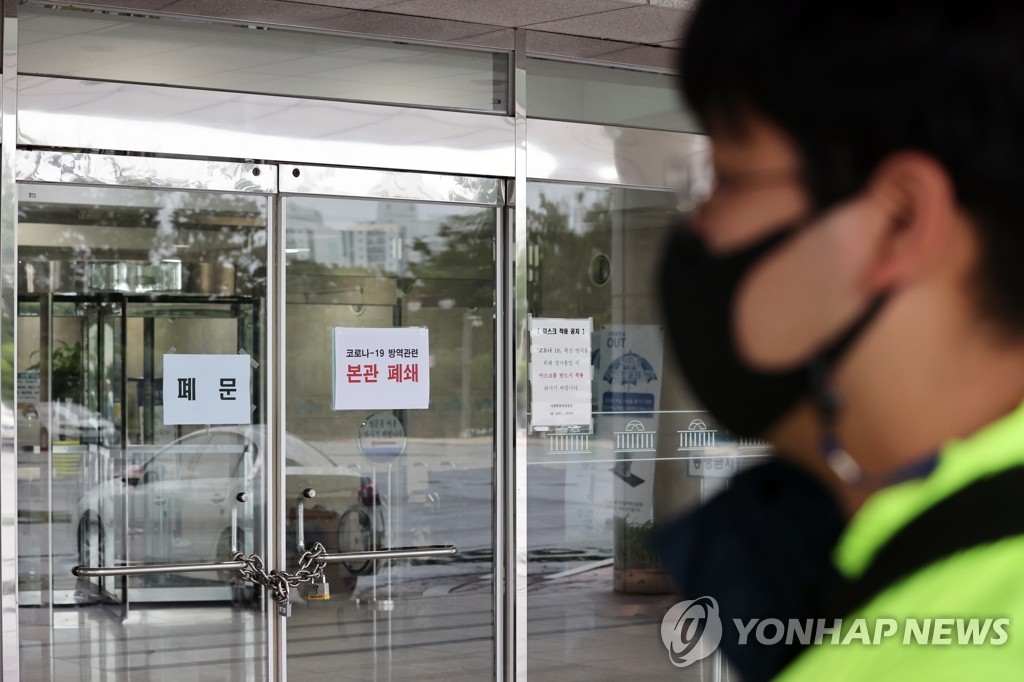 Health authorities emphasized that another wave of COVID-19 infections is just around the corner as the virus is spreading across the nation.

The country's new virus cases peaked in late February at 909 due mainly to Shincheonji followers in the southeastern city of Daegu. After some ups and downs, the daily tally even reached single digits in late April and early May.

But health authorities have warned that the latest spike is much worse than the previous massive outbreak in Daegu, as the virus spreads in the densely populated Seoul metropolitan area, while the number of cases with unknown infection routes is rising.

Health authorities have yet to identify transmission routes for more than 30 percent of the cases confirmed Thursday. Over the past two weeks, 19.4 percent of newly added patients had unknown infection routes.

To stem the virus spread, the country implemented the Level 2 social distancing scheme nationwide Sunday, with major cities enforcing even tighter measures on their own.

Health authorities said they are looking into options of moving to the toughest Level 3 distancing, and they will discuss with municipal authorities and experts to soon determine whether the country should implement the highest measures in the three-tier social distancing scheme.

"Following hygiene measures seems to not be enough, and at this time, we must minimize the gatherings of people," said Yoon Tae-ho, a senior health official at the press briefing. "We are open to every possibility, including the implementation of Level 3 distancing or enforcing measures that are close to Level 3." 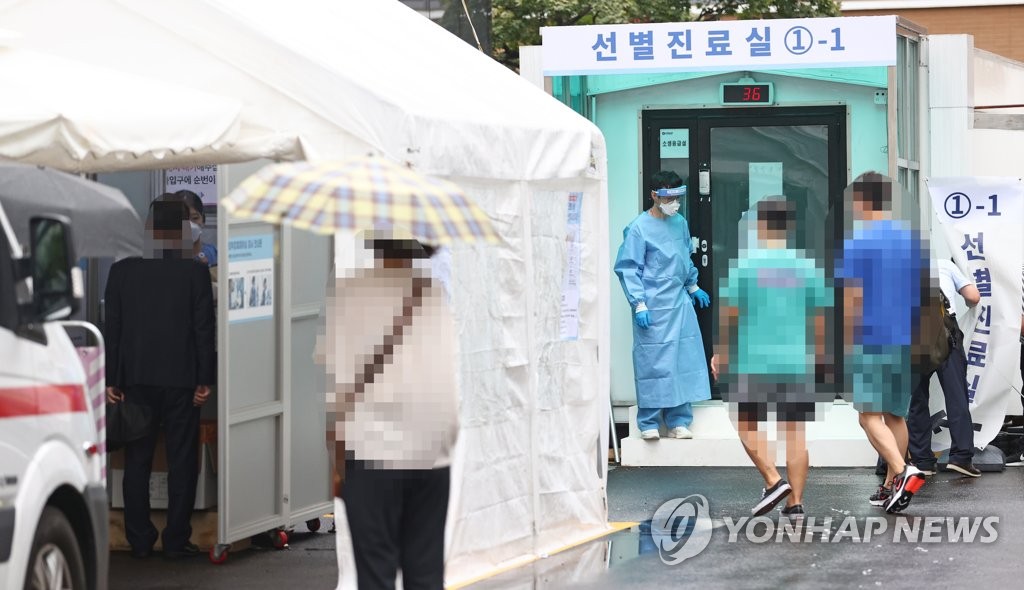 If the current restrictions are elevated to the highest Level 3, gatherings of more than 10 people will be banned. Not only high-risk facilities, such as clubs, but also mid-risk facilities, including cinemas, wedding halls and cafes, are advised to suspend their operations.

South Korea reported one more death from the coronavirus, raising the death toll to 313. Nearly half of the deceased were aged 80 or older, while 305 of them had underlying diseases, according to the KCDC.

The number of COVID-19 patients in critical condition reached 46, up four from a day earlier.

The total number of people released from quarantine after making full recoveries stood at 14,461, up 93 from the previous day, while 3,932 people are isolated for COVID-19 treatment, up 347 from a day ago.

The KCDC said a total of 155 coronavirus patients in critical condition in 36 hospitals across the country have been administered with remdesivir, an experimental drug conventionally used for Ebola.

For the development of blood plasma-based treatments, 1,223 people who fully recovered from the virus have expressed their willingness to donate their blood plasma, according to the KCDC. Among them, health authorities said they have collected samples of plasma from 897 people.