"Still, some churches (in South Korea) are sticking to face-to-face worship services," he said during a Cheong Wa Dae meeting with 16 leaders of the nation's Protestant community.

In particular, Moon added, a "specific church is rejecting and obstructing the government's coronavirus-related guidelines," without mentioning the name of the church. 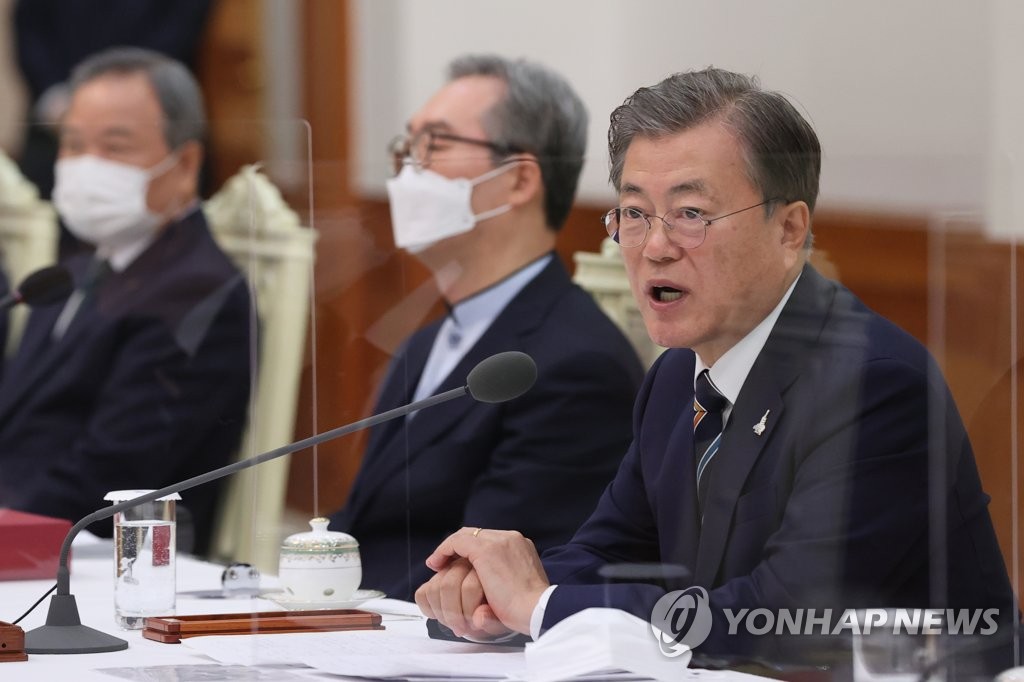 Moon was apparently referring to Sarang Jeil Church in northern Seoul, a hotbed of the recent cluster infections sweeping through the greater Seoul area and spreading fast to other parts of the country.

Its pastor Jun Kwang-hoon, a firebrand right-wing pastor who has long openly criticized the Moon administration, and many followers ignored the health authorities' warnings and participated in a massive anti-government rally in Gwanghwamun, central Seoul, on Aug. 15. Jun was among those who tested positive for the virus after the rally.

The number of COVID-19 patients associated with the church has reached 1,000, with nearly 300 others confirmed to be infected in connection with the demonstration, Moon noted.

"As a result, South Korea's antivirus fight, which has been exemplary for the world's antivirus fight, is facing a crisis at the moment, and the whole country is going through big difficulties," the president said in his opening remarks. "The people's lives are collapsing as well."

Church members should have apologized for that, but they are rather claiming a "conspiracy theory," while staying defiant of relevant regulations, he added.

Jun has argued that the virus had been intentionally brought into his church for a political reason.

"What's not understandable at all with common sense is occurring at some places in the name of the church," he said, adding that it is damaging the image of all South Korean churches.

The president requested the religious circles' support for the government's campaign to contain the COVID-19 outbreak.

He stressed that worship and prayers can't protect the people from the virus, which is a matter of science and medical services.

The government has formally banned gatherings and all other activities by churches in Seoul, Gyeonggi Province and Incheon, except for non-contact worship services. 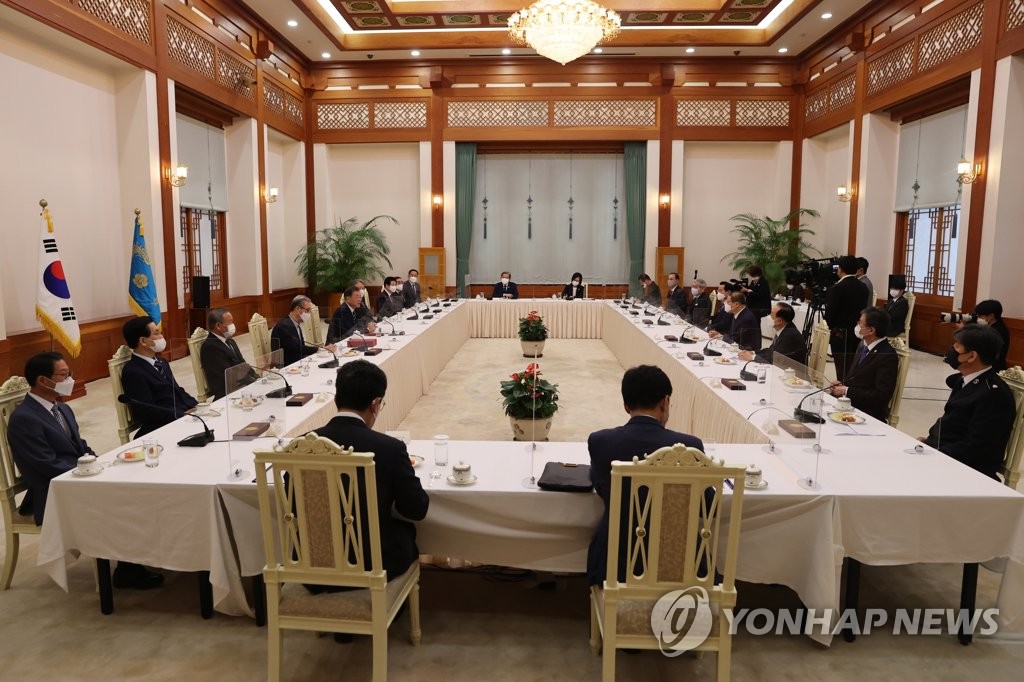 Church leaders apologized over recent infections reported at churches and agreed with Moon on the importance of taking precautionary measures and following the government's guidelines.

They also proposed setting up a joint organization to discuss ways to minimize infection risks while carrying out face-to-face worship, such as changing seating arrangements depending on the number of attendees.

But the church leaders stressed that banning face-to-face services is not a "lasting" measure in the longer term.

"The reality is that we cannot close church doors and cancel services without any measures, given that the COVID-19 outbreak is expected to last beyond weeks and months," said Kim Tae-young, who heads the United Christian Churches of Korea.

"The current measure of banning (services) at all churches is not lasting. ... It will be a burden for the government, and churches cannot agree with it."

Kim also asked the government not "to treat religious organizations, such as churches and temples, in the same way as businesses," stressing that "religion is a value that cannot be changed (even) for life for those who consider faith as their life."

Moon, however, refused to accept the suggestion of conditionally permitting in-person services for the churches, according to a written briefing released by Cheong Wa Dae spokesman Kang Min-seok after the meeting.

He said that, while he totally understands that most churches are cooperating with the government's efforts to tame the virus's spread, "it is realistically difficult" to monitor every church and make an exception on the quarantine front.

"The best the government can hope for is to stop the virus from spreading further and get it under control as soon as possible, so that we can resume normal life," Moon said, imploring the religious community to follow the government's efforts. 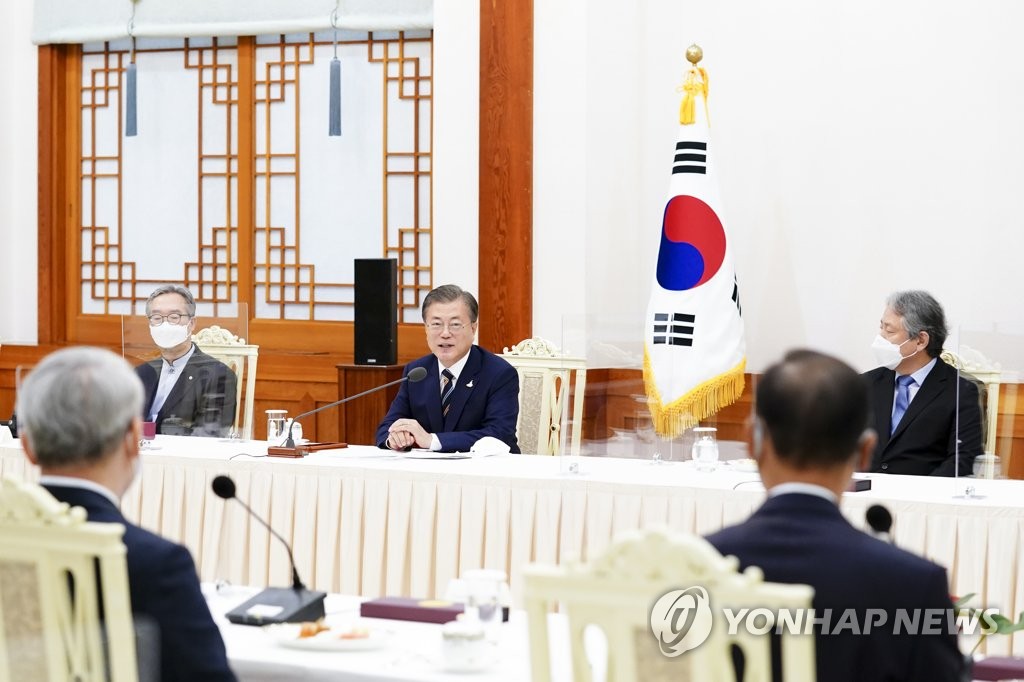 Regarding the ongoing strike by doctors nationwide against the government's medical sector reform plans, Moon said their collective action is like "soldiers leaving the battleground in a wartime situation."

It is also tantamount to a "walkout by firefighters in the midst of the largest-ever blaze," he said.

For the government, though, there are not many options, he said, pledging that it would continue efforts for "sincere dialogue" with doctors on the basis of law and principles.

"I believe and expect that our medical community will never turn a blind eye to the suffering of the people attributable to the coronavirus," he said.